Daishin Securities last month started construction on a new building in Myeong-dong, downtown Seoul, which was previously the location of a movie theater. The brokerage firm plans to relocate from its current home in Yeouido, southwest Seoul, to a new 24-story financial center once it is completed in 2017.

Until 1985, the headquarters of Daishin Securities was in Myeong-dong. But it moved to its current location in Yeouido as the government was trying to turn the area into a Korean financial hub similar to Wall Street. Once Daishin relocates, it will join the ranks of three other brokerage houses - Samsung Securities, Tong Yang Securities and Mirae Asset - which are all located outside of Yeouido.

But it’s not the only brokerage firm that is leaving Yeouido.

The number of financial companies that have already packed up and moved out of Yeouido or are considering it has increased since the global crisis of 2008. Some in the financial industry say the shift is part of the downfall of Yeouido as the nation’s financial hub.

Part of the change is due to the recent bearish money market, which is forcing companies to relocate.

Yeouido’s rise to become the center of the nation’s financial industry began when the Korean stock market moved from Myeong-dong to Yeouido in 1979. Some 18 brokerage firms including Daishin and Daewoo left Myeong-dong to open their headquarters near the stock exchange in the mid-1980s. They were joined by others in the 1990s. The nation’s largest investment trust companies - Korea, Daehan and Kookmin - as well as other brokerage companies including Seoul, Jeil and Ssangyong all began work on high-rises in Yeouido.

The money market started to expand as the benchmark Kospi broke the 1,000 mark for the first time in 1989 and the 2,000 barrier in 2007. The number of investors and the amount of transactions continued to grow as the general populace started to take interest in the fund market.

Brokerage firms in Yeouido were enjoying ever-growing profits, and Yeouido became the top investment district in the country.

But everything changed after 2008 when Yeouido was hit by the global financial crisis. The blow to Yeouido was unprecedented, as retail investors quickly left the market and the stocks froze. Brokerage companies’ profits from the stock exchange dropped drastically. 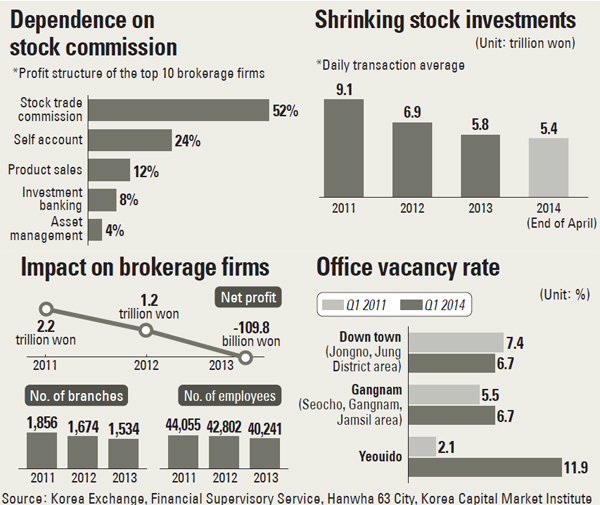 The restructuring has continued this year as companies have announced their plans to push voluntary retirement. The situation isn’t much different for asset management companies.

Reinvestments of matured funds have been shrinking. The 120 trillion won ($117 billion) that was invested in equity funds at the end of 2008 has shrunk to 55 trillion won today.

With the market still down, the number of vacant offices at Yeouido, which used to attract people, money and information, is increasing.

According to Hanwha 63 City, in the first quarter, the office vacancy rate in Yeouido was 11.1 percent, while it was only 6.7 percent in Jongno and Gangnam.

Market experts say the biggest reason for the deterioration of business in the Korean brokerage and asset management industry is business strategies.

Stock transaction commission accounts for 52 percent of all income earned by the top 10 brokerage companies in the country. Commission makes up 45 percent at smaller brokerage companies. Since each company’s strategy is almost the same, when a troubled brokerage firm is up for sale no buyers are interested.

“Whether big or small, the way they earn money is basically the same,” said a brokerage firm CEO who requested anonymity. “So there’s nothing much to gain from merging with another brokerage firm other than increasing the numbers of employees.”

The similar business models created aggressive competition between brokerage companies with each group lowering its commission rate to attract clients.

“Most of the brokerage companies make huge amounts from commission charges when the market is bullish but in times of a bear market they usually pass the time with the earnings that they stashed up during the bull market,” Sunny Yi, managing partner of Bain & Company, said during a forum held at the Korea Financial Investment Association earlier last month. “But such times will never come,” he said, adding that local brokerage firms must change their business strategies to survive.

So brokerage companies are leaving Yeouido to change their business tactics and search for new revenue sources.

Instead of focusing on retail investors as in the past, the companies are trying to attract institutional investors.

Daishin Securities is also diversifying its business strategy. In 2011 the firm acquired three savings banks, and this year it took over Woori F&I and jumped into buying junk bonds.

Its plan is to strengthen its investment bank resources and develop various insolvent bond-related products aimed at institutional investors.

“The goal of relocating our headquarters is so that all of our financial affiliates are positioned in the same area and therefore would maximize synergy,” said a Daishin Securities official.

John Lee, CEO of Meritz Asset Management, said the company left Yeouido so it would not be sucked into the Yeouido style of business, which is short-term investments that are heavily dependent on market liquidity and trends.

In other words, the strength that Yeouido provided - a strong network of related companies that led to fast information and frequent stock exchanges - no longer works in today’s market.

Kang Bang-cheon, chairman of Asset Plus, which relocated its headquarters from Gangnam to Pangyo, southern Gyeonggi, last month, made similar comments.

“As fund-investment trends have been shifting [from short term] to long term and investment is based on the value of a company, there is no need for an asset management company to remain in Yeouido.” Kang said. “A company’s value cannot be properly seen when it is mixed with the market value of the company and too much attention is given to rumors and moods.”

When the market thrived, advising clients to make constant sales and purchases worked. But in recent years, as the stock market hangs in limbo, failing to produce much profit, retail investors’ trust in their brokers has worn thin.

This has also prompted some brokerage firms to change the way they pay employees.

Starting last month, Samsung Securities has implemented a new compensation system that focuses more on a client’s profitability than on sales numbers.

“We have changed the system to where an employee who produces a stable profit will have a better evaluation than those with larger sales,” said a Samsung Securities official.

Hanwha Investment & Securities completely changed its system and no longer gives individual compensation. Instead, compensation is based on the team’s performance. Shinhan Investment has been including client profitability in employee evaluations since 2012.