Back on his game, Rafa cruises into Madrid final

Back on his game, Rafa cruises into Madrid final 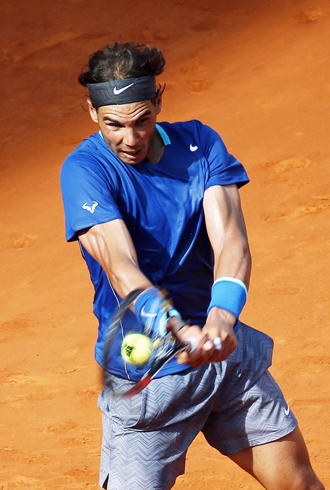 The world number one, chasing a 63rd career title and a 44th on clay, has not been in top form on his favored surface this year, losing in the quarterfinals in Monte Carlo and Barcelona.

However, he has shown glimpses of his dominant best in front of adoring fans in the Spanish capital, where he has yet to drop a set, as he warms up for a bid for his ninth French Open title at the end of the month.

Nadal’s semifinal victory ended Bautista’s best run at a Masters event and set up a clash on Sunday with either another Spaniard, fifth seed David Ferrer, who beat him in the Monte Carlo quarterfinals, or Japanese 10th seed Kei Nishikori.

Nadal said his performance was further confirmation of his improving form after Friday’s fine win against sixth-ranked Czech Tomas Berdych.

“After what I think was a great match yesterday, to have the confirmation today that the improvement is real is very good news for me,” he said.

“And being in a final here in a difficult tournament at home after losing two weeks in a row in the quarterfinals means a lot to me.” The 27-year-old Majorcan was champion in Madrid in 2010 and in 2005 when it was an indoor hard court event.

Nadal broke Bautista’s serve in the opening game at the Magic Box arena, but his gutsy compatriot fought back to level at 3-3 before losing his serve again.

Bautista looked to have crumbled in the face of a barrage of fierce Nadal drives in the second set, but raised his game to break for 4-2.

Nadal, who will be contesting his 90th career final on Sunday local time, broke serve for a fifth time in the ninth game and sealed victory on his first match point with a rasping forehand down the line.

Bautista will break into the top 30 for the first time, thanks to his performance in Madrid.

He upset Argentine Juan Martin del Potro at this year’s Australian Open and claimed a second top-10 scalp of the season when he beat Berdych in the second round at the Indian Wells Masters event.