Kaymer, Spieth in third round tie at The Players

Kaymer, Spieth in third round tie at The Players 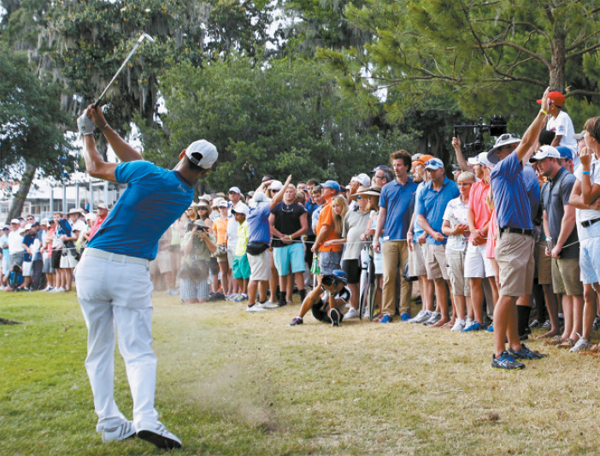 Martin Kaymer of Germany hits from the rough on the 18th fairway Saturday during the third round of The Players championship at TPC Sawgrass in Ponte Vedra Beach, Florida. [AP/NEWSIS]

Germany’s Martin Kaymer bogeyed the par-four final hole to drop back into a tie for the lead with playing partner Jordan Spieth after Saturday’s third round of the Players Championship.

Kaymer, who had been a stroke in front of the pack overnight, overshot the 18th green with his approach, chipped up to nine feet and missed the par putt to card an even-par 72 on a breezy afternoon at the TPC Sawgrass.

That left the German at 12-under 204, level with American young gun Spieth (71), who had appeared likely to bogey the final hole when his tee shot sailed right into a tree line from where he struck his second shot 56 yards short of the green.

After his third had nestled on the fringe 13 feet past the flagstick, the 20-year-old Spieth nervelessly drained the par putt to remain at 12 under and pumped his right fist in delight.

Spaniard Sergio Garcia, the 2008 Players champion, was a further three strokes back after carding a 69, level on 207 with Australian John Senden (68).

“I just didn’t hit a good putt,” Kaymer said of his bogey at the last to end a tricky day for scoring at the TPC Sawgrass where the greens were running fast and firm.

“I pulled my putt and therefore it went left. He went inside left and hit a good putt, made it. I have a chance tomorrow, which is really nice. I put myself in a good position.

“It played tough today. Even when you hit fairways, it was gusty and therefore a little bit difficult to attack the flags. We didn’t play great, but we kept it very well together. So it was okay.”

Former world No. 1 Kaymer, whose only PGA Tour victory came at the highest level with his playoff success at the 2010 PGA Championship, was lavish in his praise for Spieth, who is bidding to become the youngest ever Players winner.

“He’s one of the best players out here right now, so I think he deserves as much attention as possible,” Kaymer said of the 2013 PGA Tour rookie of the year. “He’s a young player, very mature and I hope he has a long career ahead of him.

“He’s just very good in the short game and he hit some very good chips and pitches today, some very important putts to keep his round going.

“I look forward to tomorrow. It’s going to be a good day, whatever happens. Jordan, he’s a very nice guy and we had some good chats, even though obviously each of us wants to win tomorrow.”

Spieth, who clinched his maiden PGA Tour title at last year’s John Deere Classic, is aiming to eclipse Adam Scott as the youngest winner of the Players Championship.

Australian Scott was 23 when he triumphed in 2004 at the PGA Tour event widely regarded as the unofficial fifth major.

“It was really ugly coming in, but somehow I did it,” said Spieth, who has gone bogey-free through the first three rounds despite struggling with his tee shots after the turn on Saturday.

“I’m very excited about where my game is at. I think it will be back there tomorrow, striking the ball better, finding more fairways and hopefully that leads to more birdies.”