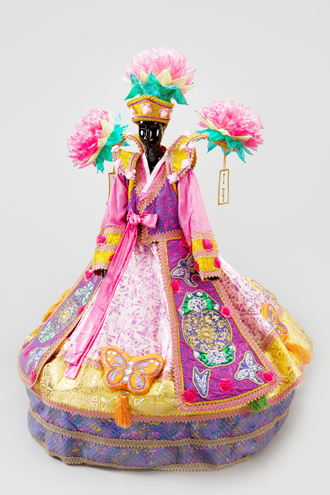 A costume inspired by hanbok, traditional Korean clothing, was shown at the Samba Carnival last year.

The National Museum of Korean Contemporary History is taking full advantage of locals’ interest in the upcoming Brazil World Cup to attract attention to its newest exhibition.

Brazil was the first nation Koreans officially emigrated to after the Republic of Korea was established in 1948, and “Coreanos no Brasil,” which means “Koreans in Brazil” in Portuguese, commemorates the history of Korean immigration to the South American country.

“Although the country is geographically far, Koreans feel friendly toward Brazil because of soccer, the Amazon rainforest and the carnival,” said director general of the Brazil Cultural Center in Korea, Kim Yong-sung, who worked on the exhibition with the Brazilian Embassy.

The event consists of three parts. The first presents documents recording how Korean emigration to Brazil began. Brazil needed more labor to cultivate farms to develop its economy. From 1963, when Korea sent its first immigrant to Brazil, around 1,300 people moved within three years.

The second part depicts how the Koreans’ “Brazilian Dream” failed. Many of the immigrants worked in the sales industry or the military in Korea and had a hard time getting used to working on large farms.

In the final part, the exhibit shows that many Koreans moved to Sao Paulo and began making and selling clothing, which is how Bom Retiro, where Korea Town is now located, earned its name as the city’s fashion capital.

“Coreanos no Brasil” will run until June 15. The museum is open 9 a.m. to 6 p.m. Tuesdays, Thursdays, Fridays and Sundays, and until 9 p.m. Wednesdays and Saturdays.