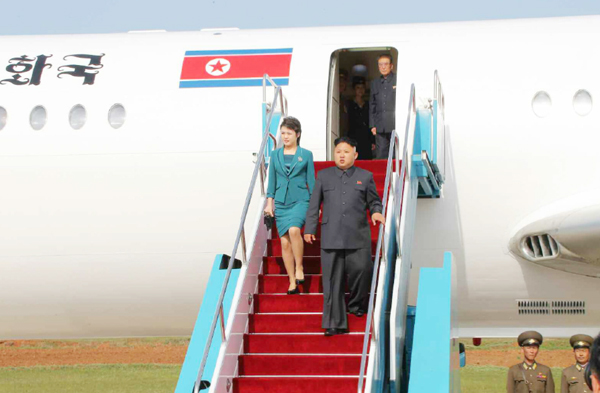 The competition - the first of its kind - was held for commanding officers of North Korea’s air force and the Anti-Air Force of the Korean People’s Army, according to the regime’s Korea Central News Agency.

The pilots flew various aircraft such as MiG-29 fighter jets, MI-2 light turbine-powered helicopters and AN-2 rocket-shooting multi-role light utility biplanes at an undisclosed air field in a western region of the North.

The exact date of the competition was not reported.

The commanding officers of various air force units displayed flight maneuvers and marksmanship during the contest.

Analysts see the competition as a way to boost the North Korean air force’s morale and also as a response to Max Thunder, the largest joint U.S. and South Korean air drills, which were held last month. The drills involved 103 aircraft and 1,400 troops, including Seoul’s state-of-the-art F-15K jet fighters and the U.S. Air Force F-15 and F-16 aircraft.

Other top officials also attended the competition, including Hwang Pyong-so, the newly appointed director of the North’s powerful General Political Bureau of the Korean People’s Army, as well as the leader’s younger sister, Kim Yo-jong.

Choe Ryong-hae, former director of the General Political Bureau and secretary of the Workers’ Party’s Central Committee, appeared in a photograph published on the front page of the Rodong Sinmun, the regime’s official mouthpiece, on Saturday, sitting directly beside Kim Jong-un. Ri was seated to the right of Kim, and Hwang, next to Ri.

This seems to stifle speculation that Choe, the regime’s de facto No. 2, had been purged by Kim Jong-un. Analysts point out that this could indicate that Choe, although he has stepped down from the position of top military chief, still remains a close mentor of Kim.

The Rodong Sinmun also published a photo of Kim and his wife Ri stepping out from the North Korean leader’s private jet, a Russian-made Ilyushin IL-62, which was unveiled for the first time at the contest.

The two walked off the jet and onto a red carpet, smiling and seemingly at ease - a marked contrast with the leader’s late father, Kim Jong-il, who had a phobia of flying because of a helicopter accident he was involved in and always traveled by train.

Kim Jong-un has shown that he is comfortable in the air. He was spotted flying what appeared to be a Cessna model light aircraft to a Wonsan rocket launch site for an inspection in March and was seen on an Air Koryo flight to Mount Baekdu last month.

While the leader of the regime paraded its aerial prowess, the North’s National Defense Commission yesterday denied sending the small drones found crashed in the South, which Seoul believes are from Pyongyang.

The spokesman of the powerful defense commission went on to accuse the Park Geun-hye government of fabricating the drone incident “as a ploy to weasel out of the Sewol ferry disaster that put the [Park Geun-hye] government in crisis.”

The South Korean Ministry of National Defense said Thursday that the three drones found in Paju, Gyeonggi, on Baengnyeong Island near the tense maritime border in the West Sea, and in Samcheok on the east coast in March and April, originated from the North.

A Seoul-Washington joint investigation team concluded that the three unmanned aerial vehicles were sent by North Korea to spy over frontline military units and the Blue House.