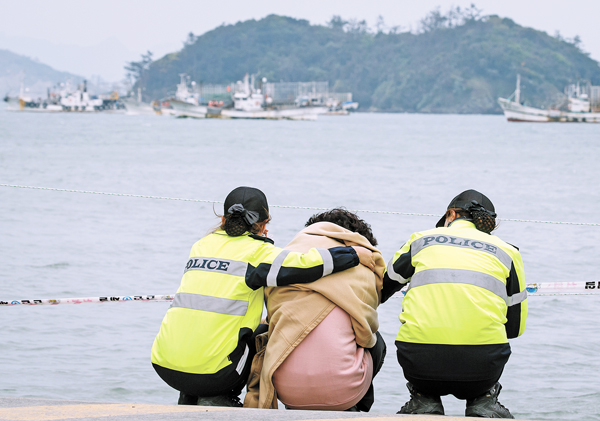 A woman assumed to be the mother of one of the still-missing 29 victims of the Sewol ferry disaster mourns yesterday at Paengmok Harbor in Jindo, South Jeolla, with two policewomen consoling her. The search-and0rescue operation was halted for two consecutive days due to aggravated weather conditions. [NEWS1]

The authorities investigating Yoo Byung-eun, the de facto owner of the sunken Sewol ferry operator Chonghaejin, is summoning people, including a former politician and his family members, who are allegedly related to secret funds built up by Yoo.

The 73-year-old business tycoon, widely considered to be the family’s patriarch, is the founder of Semo Group, a predecessor of Chonghaejin.

Chae has headed Onzigoo, an affiliate of Semo Group, since 2008, and prosecutors suspect him of embezzling money for the Yoo family. They also believe he bought many photographs from Yoo at high prices in order to funnel secret funds.

Prosecutors also suspect that Yoo’s older brother became involved in Semo Group and received 2.5 million won ($2,440) each month. Yoo Byung-il is a former deputy chairman of the Yuseong Credit Union, which his father founded, and was the managing director of a religious facility called Geumsuwon in Anseong, Gyeonggi.

The prosecution is still looking into who owns the Sewol ferry. They are summoning Yoo Byung-eun’s 44-year-old son, Yoo Dae-gyun today, to further investigate the true ownership. Yoo Dae-gyun is a major shareholder of Semo Group’s affiliates, such as I-One-I Holdings (19.44 percent), Dapanda (32 percent) and Trigon Korea (20 percent), and first joined the group in 2011 when he was appointed as the president of Socuri Trading Company, another affiliate of the group.

Given that he received 10 million won every month from Semo, an affiliate that manufactures health foods, the prosecutors suspect Yoo Dae-gyun was deeply involved in the group’s operation along with his younger brother Yoo Hyuk-gi, who were both receiving orders from Yoo Byung-eun.

Another person suspected of contributing to the secret fund is Kim Kyung-sook, a 72-year-old actress better known by her stage name Jeon Yang-ja. She is currently the head of two of the group’s affiliates, co-director of Geumsuwon and a member of I-One-I Holdings’ board of directors.

When questioned by reporters before stepping into the Incheon District Prosecutors’ Office on Saturday, Kim denied allegations of embezzlement and of being instructed on businesses by Yoo Byung-eun. Kim was questioned for about 10 hours, but the prosecution said she may be summoned again for further investigation.

The actress was starring in a drama but quit after suspicions of her being a close aide to Yoo Byung-eun arose.

The joint investigative team consisting of police and prosecutors is discussing when to summon Yoo Byung-eun. The team has reportedly obtained a document that was circulated among Chonghaejin’s president and executives to discuss measures to solve the ferry’s problems.

“We are questioning other employees of the Chonghaejin, including the president,” said an official of the team. “We are focusing on whether Yoo Byung-eun was aware of the problems of the Sewol ferry.”