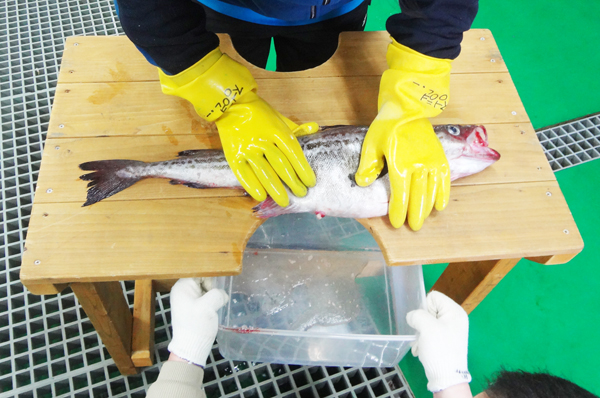 A researcher collects roe from an Alaska pollock for artificial hatching at the Deep Ocean Water and Fishery Resource Center in Gangwon. [JoongAng Ilbo]

In the face of steadily shrinking catches of myeongtae, or Alaska pollock, a team of research institutes has succeeded in producing the fish through artificial reproductive technology.

This was the first time that artificial insemination of the fish, also called walleye pollock, was successful.

The project is part of efforts by the Ministry of Oceans and Fisheries to reverse a drastic drop in the amount of pollock caught near the East Sea.

In February, the ministry asked three separate marine institutes to cooperate in the hatching effort.

The Oceans Ministry also launched a “pollock revival campaign” in February that was aimed at securing healthy, mature pollock for insemination.

Once healthy pollock were caught, the next step in the artificial insemination process was to extract eggs from the female fish and sperm from the male fish.

The next step was putting together the eggs and sperm. The researchers needed to constantly check the vitality of the sperm.

The success followed failed attempts by Wonju University in 2013 and the National Fisheries Research & Development Institute in 2010.

In an effort to boost the chances of cultivating more breeds, they also bought fertilized eggs from Japan and Russia, to no avail.

The main reason for earlier failures was premature harvesting of sperm for fertilization.

Of the some 94,000 pollock born, the research team plans to nurture 10,000 of them to be used as future egg and sperm donors while releasing the rest once they grow to a size of five to seven centimeters (1.9 to 2.7 inches).

“We need a certain amount of reproductive pollock to keep the population rising,” said Seo Joo-young, a researcher at the Deep Ocean Water and Fishery Resource Center.

“In order for pollock to keep growing and become mature enough to spawn, they need to be in waters with low temperatures,” he continued, “But the water temperature in the East Sea is not always that low so we created an artificial fish tank that is capable of extracting deep sea water and keeping temperatures low.”

Since it was the first time the institutes will be raising artificially-produced pollock, the joint research team said it will seek cooperation and expertise from overseas institutes that had more experience.

“Japan’s maritime research institute in Hokkaido also made it, but the survival rate of the artificially-produced Pollock was only 10 percent,” said Kwon Oh-nam, a researcher at Gangneung Wonju National University.

“This is also a great achievement but what’s even more important is how to raise them,” Kwon said.