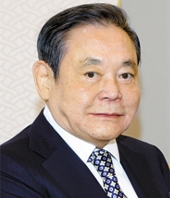 Samsung Electronics Chairman Lee Kun-hee is recovering from a heart attack at Samsung Medical Center in southern Seoul, Samsung Group reported Sunday. The 72-year-old Lee was taken to Soon Chun Hyang University Hospital in Hannam-dong, central Seoul, Saturday night after he had difficulty breathing at his Hannam-dong home, group officials said. He developed heart attack symptoms after arriving at the Yongsan District hospital and received CPR before being stabilized, they said. He was moved to Samsung Medical Center in Irwon-dong early Sunday. Group officials said Lee is in “very stable” condition.

“Chairman Lee Kun-hee underwent surgery for lung-related disease in the past,” said an official of the group. “His symptoms are not serious.”

Lee’s son and heir-apparent, Samsung Electronics Vice Chairman Jay Y. Lee, returned from a business trip to the United States after hearing the news of his father and visited him at Samsung Medical Center yesterday, according to the group.