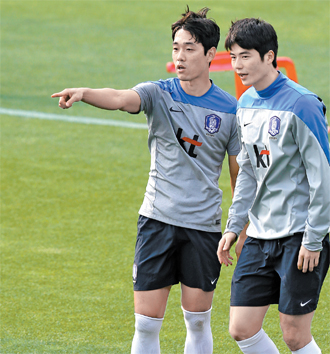 Park Chu-young, left, and Ki Sung-yueng converse during the first day of training for the Korean national football team yesterday at the National Football Center in Paju, northern Gyeonggi. [NEWS1]

Training got under way yesterday at the National Football Center in Paju, northern Gyeonggi, for the Korean national team that will compete in the 2014 Brazil World Cup.

The rest of the players will arrive in accordance with their club schedules, the association said.

Koo Ja-cheol of FC Mainz, Ji Dong-won and Hong Jeong-ho of FC Augsburg will return to the country today and veteran defender Kwak Tea-hwi, who plays in Saudi Arabia, will arrive Thursday.

“Now I feel like I’m on the starting line,” Coach Hong Myung-bo told reporters before the first training session at 3:30 p.m. “I plan to spend the next month improving the team’s weaknesses. I will first check the physical condition of players to give them appropriate training schedules. I will demand that each player be ready to play more than one position because such versatility will be a huge plus for us in an event like the World Cup, where unforeseen circumstances can occur at any time.”

Hong said the team will start tactical training May 21, when all players are at the camp.

Players spent most of their time yesterday on conditioning and working on their stamina with fitness coach Seiko Ikeda. Park Chu-yong, who returned to the country last month due to a skin disease on his right foot, said he has fully recovered.

“I know there are many different opinions around me [being selected to the national team],” Park said. “I want to ask people to take some time and carefully watch how I perform in upcoming matches. I’m getting better every day, and I think fans will see some good things in the match against Tunisia [May 28]. I also know fans worry that the team is too young, but I think the team consists of many good players. Some say I should be one of the leaders of the team, but I consider myself a big brother who can give some advice to younger players as I have played in two World Cups [2006 in Germany and 2010 in South Africa].”

Lee Chung-yong was one of the youngest players in the 2010 World Cup. As the starting right-winger, he led the team’s offense along with veteran Park Ji-sung, who retired from the national team in 2011, by scoring two goals. This time around, Lee is one of the few players with World Cup experience and a leading candidate - with Koo Ja-cheol - to be named team captain.

“The reason we were able to advance to the second round in 2010 was because we won the first match against Greece,” Lee said. “I only think about winning our first match against Russia. I don’t have any personal goals. Like Coach Hong said, we will fight as a team and win as a team.”

For 196-centimer (6-foot-4) striker Kim Shin-wook, the World Cup is a stage where he can prove the competitiveness of the K-League Classic. Only six members of the team are from the league and three of them are goalkeepers. “I think the competition [for the striker position] hasn’t ended yet,” Kim said. “I know Park [Chu-young] is the coach’s first option, but I think I can be in that position if I show what I can do during training. As one of few K-Leaguers, I feel like I represent not only the country, but also the Korean league, and I really want to show the competitiveness of our league to people around the world.”