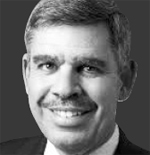 In both Europe and the United States, economic growth is picking up, confidence is improving (albeit not universally) and financial markets are holding up very well - all despite geopolitical headwinds such as those coming from Ukraine. The Fed is on a more confident course to end its extraordinary bond-buying program this year, and the ECB is feeling more comfortable about taking measures next month to counter excessively low inflation.

Nonetheless, the central bankers are far from relaxed. Draghi pointed out the risk that a longer-than-expected period of extremely low inflation, together with the excessive fragmentation of credit markets along national borders, will weigh on growth and job creation in the euro area. Yellen noted that a slowing housing market could damp the recovery in the United States. Both are aware of the risks associated with the threat of disruptions in energy supplies to central and western Europe.

In sum, it’s still not certain that the U.S. and European economies will achieve “liftoff” anytime soon, and it’s not a good thing that central banks continue to carry the bulk of the policy burden on their own. Nor is it possible to know where the current phase of range-bound economic activity will eventually take us, and what the central bankers’ better-telegraphed intentions will ultimately achieve, despite talk of a “Great Moderation 2.0.” Over the medium term, there’s roughly as much chance of success as there is of economic stagnation and renewed financial disruption.

Committed as they are to doing whatever it takes to achieve a desirable outcome, central bankers are not naive about their policy limitations. They have fixed many malfunctioning segments of the financial markets. They have floored interest rates near zero and boldly engaged in aggressive bond-buying programs. They have also bravely ventured into the world of providing “forward guidance” on their future policy moves. But the impact of all this is far from certain - particularly when central bankers are shifting their stated goals from specific variables such as detailed calendar guidance or the unemployment rate to broader economic objectives, as is happening in the United States, and doing so in quite an evolutionary and experimental manner.

Stein laid out the risks this week in a well-crafted speech in New York. He reminded us that the efforts of the policy-making Federal Open Market Committee “to overly manage the market volatility associated with our communications may ultimately be self-defeating.” This should not be particularly surprising given “the fact that the market is not a single person, the fact that the committee is not a single person, and the delicate interplay between the committee and the market.”

In short, we should feel reassured that the most powerful central banks in the world remain “all in” when it comes to improving the global economic outlook. We should also be concerned that their best efforts might not be enough.

*The author is the chief economic adviser at Allianz SE.