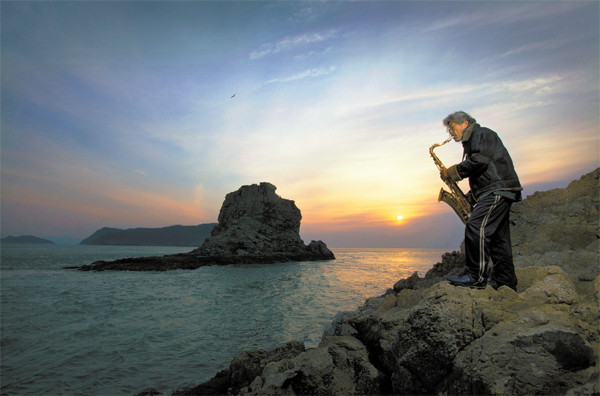 Kim Jin-muk plays the saxophone at dawn. He loves to perform music from the 1930s, as it represents the regret and sorrow of everyday people.

Kim Jin-muk is a pioneer of the Korean jazz scene, having established himself as a critic and music director of the genre over the past three decades.

The jazz aficionado has been living on Dokgeo Hyeol Island, a deserted piece of land near Jindo, South Jeolla, to concentrate on producing music.

“Globalizing trot is the mission I want to fulfill for the rest of my life,” said Kim. “Trot music has the potential to impress a global audience. I’m into rearranging the tones so that it can appeal to a wider range of people.”

The critic added that his favorite trot music is from the 1930s. 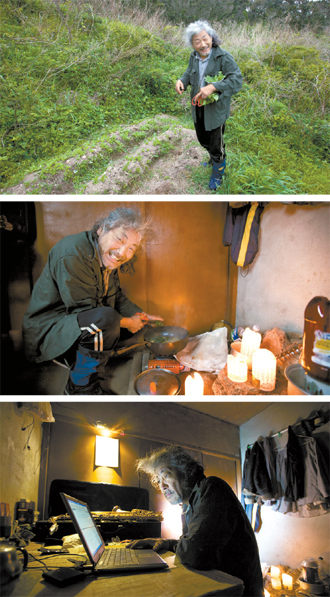 To visit Kim, I had to go to Jindo Island in South Jeolla, near the site where more than 300 innocent lives were taken from us last month. Because of the Sewol tragedy, Paengmok Harbor was still unavailable to use, so I was told to take a passenger ferry from Seomang Harbor instead.

After sailing for about 70 minutes, I arrived at Hyeol Island, which was abandoned several decades ago.

Kim’s earthen-floor room seemed to represent his simple perspective on life; there was a desk and a bed, along with a laptop and his beloved saxophone. No extravagant items existed in the room.

The musician said he uses solar power to generate electricity. No kitchen, no restroom. “I drink water by purifying rain water,” Kim said.

When asked about the inconveniences of such a lifestyle, Kim simply replied, “When you become too wealthy, you are bound to have a depraved mind. Thus we all need to let go of something to stay mentally healthy.”

Then he took me out to the beach, where he shared some of his stories related to music. Kim grew nostalgic talking about a drug peddler in his old neighborhood of Seochon, an old village in western Seoul.

“Those peddlers used to play the violin to lure buyers into our town. But, thinking about it, they were amazingly good players. It was truly unique in that they combined the melancholy traditional Korean sound with the Western instrument.”

Kim Jin-muk then offered me home-cooked vegetables mixed with rice for dinner and talked about his interest in Western music. “I’ve always been intrigued by African-American music from the United States,” said the music critic, explaining why he wrote the book, “History on the Cruelty Toward African Americans” (2011).

“I wanted as many people to empathize with their history and how the historical background gave rise to jazz in the United States. I particularly think that funeral bands in New Orleans played a significant role in developing jazz.”

“Music is my life, and my life is music,” remarked the 62-year-old, who still dreams of achieving much more in the Korean music scene.