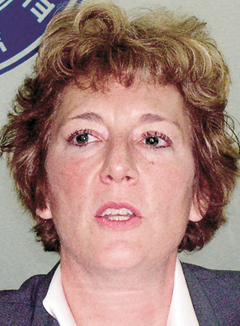 Suzanne Scholte, a veteran American human rights activist for North Korea and Western Sahara, won a Republican primary to run for a seat in the U.S. House of Representatives, her homepage said Saturday.

The Republican Party nominated the 55-year-old activist as its candidate for the 11th Congressional District in Northern Virginia to run against Gerry Connolly, the incumbent Democratic representative in the district, the Web site said. Defeating two challengers, Scholte obtained about 68 percent of the votes in the district, which has many Korean and other Asian voters, according to Yonhap News Agency.

“I can defeat Gerry Connolly, and today is the day we begin,” Scholte said in an acceptance speech, her Web site said. “This is time for all of us to come together to preserve what makes America the greatest nation on earth, our Constitution, our rule of law, and our freedoms.

“We need a change from politics as usual,” she said. “Gerry Connolly is the poster child for the do-nothing, dysfunctional hyper-partisan Congress. It’s time to put people before politics.”

For more than 18 years, Scholte has worked as a human rights activist with a focus on North Korea, collaborating with the U.S. and South Korean governments.

As a founding member of the North Korea Freedom Coalition, Scholte arranged the first hearing in the U.S. Congress on human rights violations in North Korea’s notorious political prisons by inviting a defector from the regime. In 2003, she invited Hwang Jang-yop, a former party secretary of North Korea’s ruling party, to a U.S. congressional hearing to testify about dire human rights violations in the Communist state. In 2004, Scholte was instrumental in the U.S. Congress’s decision to pass a bill to improve human rights in North Korea.

In a speech in February, Scholte said she would focus on passing a pending congressional bill that would impose stricter sanctions on North Korea.