Gov’t to give locals financial aid

Gov’t to give locals financial aid 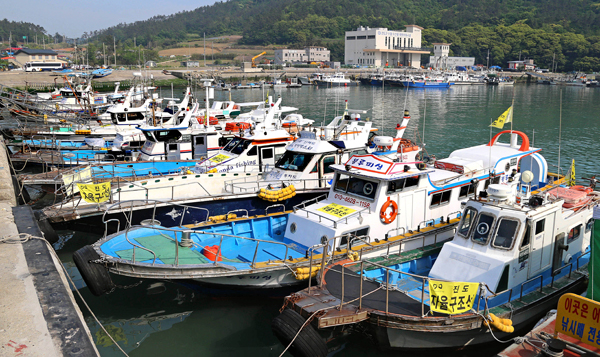 Fishing boats are anchored at Seomang Harbor in Jindo, South Jeolla, yesterday. As the search and rescue mission did not resume yesterday, ships taking part in the operation could not leave the harbor. By Choi Seung-shik

Fishermen living on Jo Island in Jindo, South Jeolla, located 15 kilometers (9.3 miles) north of the Sewol ferry accident scene, have been working hard for nearly a month. But instead of fishing, they’ve been looking for missing passengers and cleaning up oil leaked from the ferry.

The fishermen were among the first vessels to approach the sinking ferry and they saved more than 70 passengers, but they have not been able to work since because the government asked them to search for missing passengers and remove oil slicks instead.

The government yesterday decided to compensate the locals to make up for their loss of income.

This is normally one of the busiest times of year for fishermen. In May the local residents harvest eels, rockfish, crabs and gloiopeltis furcata, a type of seaweed that grows on rocks.

The situation is no better on Donggeocha Island, where oil leaked from the ferry reached the island and ruined its seaweed. All 200 residents were supposed to join in the seaweed harvest, but this year they are washing oil-coated rocks and cleaning the shoreline instead.

Even people living on islands that have not been hit by oil leaks and those who make a living by renting out fishing boats have been affected by the Sewol sinking.

People are now hesitant to buy maritime products from the region and fishing boat owners were also asked to help look for missing passengers. They also have not yet received any financial compensation.

As the search has stretched on for nearly a month, authorities have finally decided to financially support the fishermen living near the Sewol ferry accident scene for economic damages they have suffered.

The government plan includes compensating local fishermen for gas used by vessels that took part in the search operation and any damages to their livelihood caused by oil contamination of seaweed and fish farms.

To ensure the payments are made soon, the South Jeolla provincial government will pay the locals in advance until the Ministry of Oceans and Fisheries can allocate money from its existing budget.

Because the residents must prove that they suffered a loss of income, the government will dispatch employees of the Jindo County Office and National Federation of Fisheries Cooperatives for guidance.