Historical film has always been popular in Korea, but the trend has accelerated at the local box office over the past few years. From the ancient Goguryeo Kingdom (B.C. 37 - A.D. 668) to the independence activists under Japanese colonial rule in the 20th century, filmmakers have used different heroes from the past to quench viewers’ thirst for tales starring successful leaders.

The enthusiasm of audiences for the movie, which has drawn in more than three million viewers so far, contrasts with critical reviews that said the film was not entertaining enough and that it lacked solid historical facts.

King Jeongjo’s story has been revisited by contemporary Korean directors many times, but “The Fatal Encounter” is the ultimate evolution of King Jeongjo’s image. Although the movie’s setting is rooted firmly in the past, it’s clear that King Jeongjo has timeless appeal for Koreans. 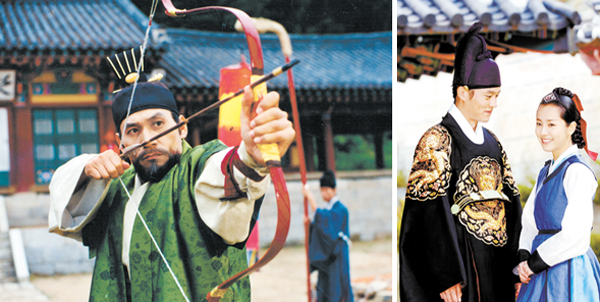 Ahn Sung-ki played King Jeongjo in the 1995 film “The Eternal Empire,” based on Lee In-hwa’s best-selling novel of the same title., The 2007 drama “Yi San” focused on the king’s friendship and love.

“King Jeongjo was a truly talented human being who foresaw the future of Joseon,” noted Lee Deok-il, head of Hangaram History and Culture Institute in Mapo District, western Seoul. “Unlike his predecessors, the king was more open to the outside world - he was a leader who could read the historical context of his time.”

In 1776, Joseon was a country witnessing a widening gap between the rich and poor, and government corruption was prevalent. Clashes between the old paradigms and the new inspired common people to seek change.

The words of Confucius, which Joseon society was based on, were becoming too distant from the everyday lives of 18th-century laymen. Government officials were driven by bloody political drama, so no one stepped forward to lead the way for the people.

While Yi Seong-gye and the rest of Joseon’s founding fathers wanted to reinforce the king’s powers, Confucian teachings said that aristocrats should guide kings to run the country, which led to a never-ending power struggle between monarchs and their subjects.

Then, in the 17th and 18th centuries, after undergoing a series of merciless political battles, the royal family compromised with the aristocrats, who in turn asked the king to do very little, or nothing at all. Power was given to a few elite policy makers only.

At the age of 11, the young prince saw his father, Crown Prince Sado, starve to death inside a rice chest on King Yeongjo’s orders. “Witnessing the conflict between his father and grandfather would’ve undoubtedly traumatized young Jeongjo,” said Lee.

“Joseon saw a battle between the royal powers and nobility since its start,” remarked history professor Kim Ki-bong of Kyonggi University. “Crown Prince Sado was the ultimate scapegoat of the power struggle inside the Joseon government.”

Unlike his father, Yeongjo, who compromised with Noron officials, Sado was more inclined to side with the opposition faction, Soron, and dreamt of restoring the Joseon monarchy.

Then King Jeongjo came to the throne and sought change for a new Joseon.

A devoted scholar, Jeongjo refused to merely follow the ideas of dominant party members. Rather, he tried to embody the ability to govern with moral legitimacy, and established Kyujanggak, the royal library, to support his reform policies as soon as he won royal control. Throughout his tenure, King Jeongjo tried to strengthen royal power by bringing stability to the lives of common people.

However, Jeongjo agreed with the opposition Soron party’s perspective and thought it better to build a relationship with the new Chinese dynasty based on practical thinking. But he faced difficulties in advancing his reform policies, as his nation’s social system had been set rigidly for more than 400 years.

Lee, who also wrote “The Country Prince Sado Dreamt” in 2011, believes that King Jeongjo’s murder was planned by Noron, a group he had troubles with throughout his lifetime.

“Although so-called mainstream history scholars refuse to accept it, King Jeongjo was poisoned to death, and there is a lot of hard evidence to prove it,” said Lee.

Conspiracy theories surrounding King Jeongjo’s death were first ignited by Lee In-hwa’s 1993 novel “The Eternal Empire,” in which the author explored the mysterious 24 hours before the king’s death.

The questions Lee In-hwa’s fictional work raised about the death of the 22nd Joseon king led it to rank on the year’s best-seller lists. Until the late 1980s, the public had an image of Jeongjo as a frail young king troubled by his father’s death. But after the success of “The Eternal Empire,” local media started to look into Jeongjo’s Joseon reforms.

King Jeongjo hit the spotlight again in 2007. KBS television producer Kwak Jung-hwan’s eight-episode drama “Conspiracy in the Court,” whipped up further public interest in the leader’s death. Kwak’s series focused on social problems in 18th-century Joseon from the perspective of a marginal government officer, Park Sang-gyu, who was born to a concubine of the yangban, or noble class.

Some television critics pointed out that the drama had a political motive, however, as the portrayal of Jeongjo’s resembled Roh Moo-hyun, the incumbent president at the time. But Kwak denied these accusations in a 2007 interview with local media.

Contemporary social problems made many people dream of a ruler who could bring change. Koreans, according to professor Kim Ki-bong, have applied their ideal image of a leader to King Jeongjo over the years as a result.

“Today’s Koreans project their own unfulfilled dreams through King Jeongjo,” noted Kim. “In that sense, King Jeongjo is an avatar for contemporary Koreans .?.?. Jeongjo perfectly captures the zeitgeist of the Korean Peninsula in the 21st century.”

Nonetheless, he distanced himself from conspiracy theories about the king’s death. “King Jeongjo died at 49 years old, which was not abnormal at that time,” Kim said.

King Jeongjo’s narrative of change and reform reaches a pinnacle in “The Fatal Encounter.” Compared to the 77-episode MBC drama “Yi San” (2007), which focused on the friendships, dreams and loves of the king, the recent movie depicts King Jeongjo’s political agenda in a much more straightforward fashion.

“The Fatal Encounter” repeatedly cites the 23rd chapter of the Doctrine of the Golden Mean, an ancient Chinese book that royals and nobles had to study in order to rule, “One that can impress heaven can bring change himself.”

Change is not the only thing dealt with in King Jeongjo’s stories. Scores of films, novels and television dramas have focused on the King Jeongjo era, though the plot has not always revolved around the king.

In 2010, the animosity between King Jeongjo’s Noron and Soron political factions was translated into a fantasy romance in the KBS drama “Sungkyunkwan Scandal.”

The young son of a Noron official and the daughter of a collapsed Namin (Southerner) family develop a romance while studying at a royal academic institute. Though it seems like a romantic comedy on the surface, as the story unfolds, viewers realize that the producer is discussing social integration issues through the fledgling scholars’ dreams.

The drama also emphasizes gender struggle, as well as the chasm between the ruling and the lower class, both of which are problems King Jeongjo tried to tackle.

Reforming Joseon society was an innate mission for King Jeongjo, in part to regain the honor of his deceased father. Under the Impartial Policy, the king tried to reinforce royal power, while recruiting intelligent scholars regardless of their background. And in 1791, his 15th year as king, Jeongjo abolished the Hanyang (Seoul) merchants’ monopoly over the downtown market in order to challenge the cozy relationship between the sellers and some members of the noble class.

But King Jeongjo’s reform drives were left unfulfilled after he died. His young successor could not continue his grand plans because the power was snatched up immediately by Jeongjo’s step-grandmother, Queen Jeongsun.

Perhaps the unfinished business is why Koreans are still yearning to achieve King Jeongjo’s dream of a better society.

Kim Ki-bong also noted that, compared to other 18th-century monarchs around the world, King Jeongjo cannot be called a true reformist for he was unable to go beyond the confinement of the Confucian system.

Then how should Koreans understand and celebrate King Jeongjo in the 21st century? Professor Lee Taek-gwang of Kyung Hee University finds that King Jeongjo’s quintessential message is about fulfilling justice in society.

“Ensuring fair treatment of talented individuals, one of the significant moves conducted by Jeongjo, is something that can still be applied in 2014 Korea,” maintained Lee.

Some people worry that Korean pop culture has been showing too much fondness toward King Jeongjo, which they say might somehow result in a distorted understanding of history.

“Historians study what happened in the past. But historical fiction, on the other hand, fills the gap that cannot be achieved in reality,” concluded Kim.

The question is how can those thousands of dreams be embraced by reality. What changes are we still seeking?