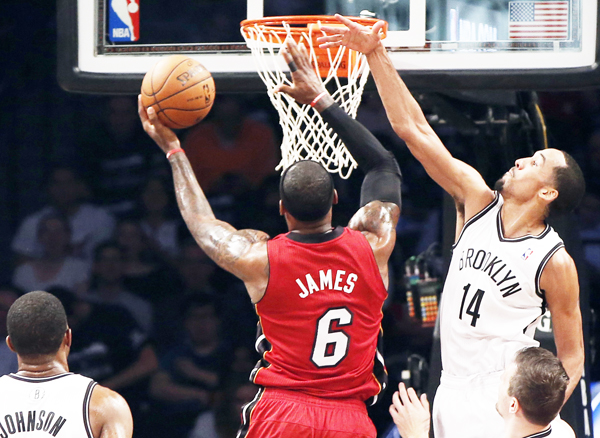 Brooklyn Nets guard Shaun Livingston (14) tries to block a shot by Miami Heat forward LeBron James in the first half of Game 4 of their second-round NBA playoff series at Barclays Center on Monday in New York. [AP/NEWSIS]

LeBron James tied his career playoff career high with 49 points, Chris Bosh made the tie-breaking 3-pointer with 57 seconds left and the Miami Heat beat the Brooklyn Nets, 102-96, on Monday night to take a 3-1 lead in the Eastern Conference semifinals.

James was 16 of 24 from the field and 14 of 19 from the free throw line in matching the 49 points he scored for Cleveland against Orlando in the 2009 Eastern Conference finals. He missed his second free throw with 1.1 seconds left.

Joe Johnson scored 18 points for the Nets, who were 15 of 25 from 3-point range in their Game 3 victory, but 5 of 22 in this one. Paul Pierce scored 16 points, while Deron Williams and Shaun Livingston each had 13.

Dwyane Wade scored 15 points on the night his Heat postseason record of 46 points was shattered. Bosh finished with 12.

Miami pulled out a thrilling victory in a game during which neither team led by double digits and has won at least one road game in 14 straight series, breaking the record set by the Chicago Bulls from 1991-4.

Brooklyn opened the fourth quarter with six straight points to grab an 82-79 edge, and neither team had a bigger margin than that in the period until Kevin Garnett’s two free throws tied it with 2:30 remaining.

Wade scored 46 points against Boston in the first round of the 2010 playoffs, and James’ best in a Heat uniform had also come against the Celtics, his memorable 45-point performance that saved Miami’s season in Game 6 of the 2012 Eastern Conference finals.