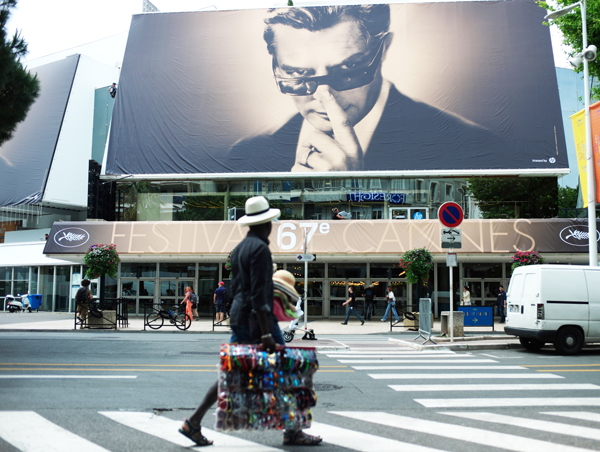 A street vendor walks past a banner of Federico Fellini’s film “8 1/2’” on the Palais prior to the 67th international film festival in Cannes, southern France, May 12. [AP/NEWSIS]

NEW YORK - An hour’s drive down the French Riviera from Formula One’s annual Monaco Grand Prix, the Cannes Film Festival is arguably its equal as an endurance test, a high-speed frenzy and, yes, a race course with a checkered flag.

The obstacles in Cannes are a little different: beige-suited guards who dismiss premiere attendees lacking proper shoes or bow ties; hordes of star-gazers amassed outside the seaside luxury hotels; movie audiences with famously fiery tastes that can make or break a film’s debut; and even fellow filmmakers competing for the festival’s prestigious trophy, the Palme d’Or.

“I used to race cars and motorcycles,” says director David Cronenberg. “I’m competitive enough that if you put me on the race track, I’m going to want to win. Sure, I would want to win the Palme d’Or.”

Cronenberg, the Canadian maker of horrors like “The Fly” and violent dramas like “Eastern Promises,” is one of 18 filmmakers in competition at Cannes for the Palme d’Or, a prize that will be selected by a jury headed by director Jane Campion.

Yet Cannes, which opens today with the premiere of “Grace of Monaco” with Nicole Kidman, is much more than that heightened contest. It’s a Cote d’Azur crush of celebrity; the world’s largest movie marketplace, where countless films are bought and sold; a sprawling cinema event - the biggest in the world - that encompasses several sidebar fests; and a promotional palace where movies try to capture international attention. But its foundation is the movies in competition.

This year brings a selection somewhat light on Hollywood and perhaps missing some of the year’s most anticipated releases. But it’s heavy on world-class auteurs, including Jean-Luc Godard, Ken Loach, the Dardenne brothers, Mike Leigh and Michel Hazanavicius, returning to where his “The Artist” became a sensation.

Films in competition will bring a bevy of A-listers, including both former “Twilight” co-stars Robert Pattinson (in “Maps to the Stars” and the Aussie outback thriller “The Rover”) and Kristen Stewart (in Olivier Assayas’ “Clouds of Sils Maria”). Ryan Gosling presents his directorial debut, “Lost River.”

For the French director Assayas, premiering in competition in Cannes is “sheer adrenaline.”

“Cannes for some reason has its own wave. It’s really a matter of chemistry,” says Assayas. “You can be extremely proud of the film that you’ve made and blah blah blah, but you never know how it will interact with the film festival, with the vibe of the festival. You have to cross your fingers.”

“Grace of Monaco” kicks off the festival with a curious backstory. Its director, Olivier Dahan, has feuded over the final edit with Harvey Weinstein, who is to release the film in North America. Dahan will premiere his cut in Cannes.

DreamWorks CEO Jeffrey Katzenberg, long a Cannes regular, will premiere the animated sequel “How to Train Your Dragon 2,” an event that will also fete the 20th anniversary of DreamWorks.

“It’s just an amazing platform to be able to promote to the worldwide entertainment media whatever you may have to offer,” says Katzenberg.

There will be no shortage of showmanship at Cannes, which will also feature a lavish party for the latest “Hunger Games” release, “Mockingjay: Part 1,” and a promotional event for Sylvester Stallone’s “The Expendables 3.”