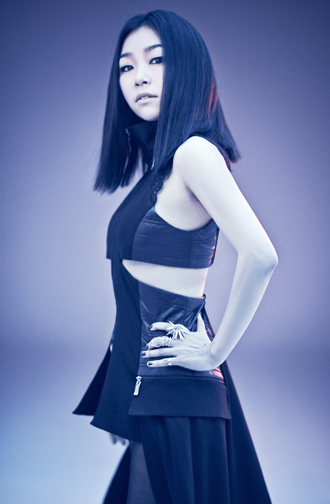 These days, young people make endless neologisms, putting two words together to express situations or their feelings in a personal style.

As part of the “Syncrofusion” project, Park worked on a mini-album featuring three songs, one of which is Park’s first attempt at creating a light, cheerful and fast-tempo piece.

The mini-album is comprised of tracks that Park “synced” with other artists from different genres to create new musical styles.

But because of the tragic Sewol ferry disaster, Park’s agency BluePrint Music announced that it will indefinitely postpone the release of the record.

“We are very sorry to those who’ve been waiting for Park’s new mini-album,” said the agency through its Facebook and Twitter accounts. “Updates on the release dates will be announced through our official SNS pages.”

For fans who are still waiting for her album’s release, Park has launched “Next Year” - a tranquil and slow track - on April 30.

“Next Year” has put Park to the top of the local music charts, and the song has enjoyed positive reviews from critics and the public.

Although Park is delaying the release of the full record, she explained that this mini-album is the first of three that she plans to create within the next year.

“This is not just a collaboration work or featuring work. It’s fusing unusual genres together to create something totally new,” said Park during a press conference last month.

Park’s first partner in the project is Team89, a production unit under Yoon Jong-shin’s agency Mystic89. Yoon, a singer, songwriter and producer, wrote Park’s debut single “My Day” in 1998.

“Working with Yoon again inside a recording studio was actually the first time after my debut,” said Park. “When I worked with him the last time, we had a relationship of top and bottom. I was a rookie singer who had just come to Korea. I didn’t even know how the songs were recorded and how to work with a songwriter. I listened to every word he said and followed his suggestions.”

But this time, Park said, the relationship between them was “equal.”

“This time, rather than me just listening to his suggestions, we worked together. When he talked about his suggestions on a song, I could reject them and tell him my thoughts,” said Park.

“He looked quite shocked about that, but he quickly told me, ‘Oh, right, you are my partner, not the little Jung-hyun of 16 years ago.’?”

Park, now 38, who was born and raised in the United States, debuted in Korea in 1998. She is considered to be one of the nation’s most talented female R&B singers.

Although the mini-album’s release has been delayed, Park kicked off her solo concert tour across the country, starting at Blue Square in Hannam-dong, central Seoul, on May 9. She will hold more Seoul concerts on Friday to Sunday before moving on to perform in Busan, Daegu and Daejeon. Before the concerts, Park sat down with local media to talk about “Syncrofusion.”

Q. Can you explain more about this new form of music, “Syncrofusion”?

A. After my eighth album two years ago, I thought about releasing a ninth, but I was hesitant to release an album just because I had to. But by not releasing any albums, it seemed I was taking time off for too long, so I wondered what would be the best way to show the public what I was doing. Recently, I’ve been collaborating with other artists and this idea came up to make a collaboration series - not the usual collaboration we know of but a “team project.”

You said this is only the first in a three-part series. Can you explain more about the project?

In the concept of “syncrofusion,” there are many different genres that are fused together. I wanted to meet artists of different genres and “fuse” our own distinctive colors. To my surprise, a totally new color was created; it wasn’t my color, or the partner’s color. It differs from collaboration or featured works. This experience is so fun, surprising and amazing.

Who do you want to work with for the second “Syncrofusion” album?

I was actually afraid to start this project, but I gained confidence while working with Team89. I was not used to working in a group, so I felt a little shy. You know, the process of writing a song is very personal. You go into this little room and work on your own. So I was a little shy about showing others how I write music. It was like going to a public bathhouse for the first time.

Which hip-hop artists do you want to work with?

I have so many favorite hip-hop artists. I’ve worked with Dynamic Duo the most. But as I’ve already collaborated with them once, I don’t think it will be something new. I am thinking of asking them to recommend me an artist.

I was really into Beenzino’s first album, and I also like Zion. T and Primary. Recently, I am into Verbal Jint as well. I mean, they are all very fabulous. I want to choose an artist who I can work with in harmony.