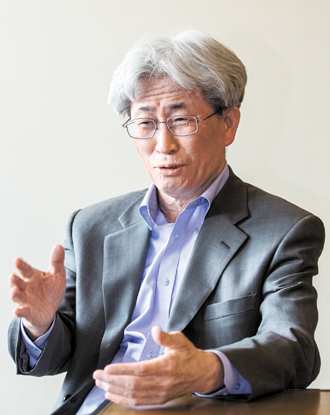 Bok Koh-ill, a 68-year-old novelist and conservative pundit, has a profound understanding of life and death, based on his own experience. More than two years ago, he was diagnosed with terminal liver cancer, but he refused to receive treatment and instead has been focusing on his writing. It was only after his autobiographical novel was released that people around him found out about his illness and asked why he let go of hope and chose to follow the path of despair.

“First, it was liver cancer, and then it spread to the abdominal cavity,” Bok said in a recent interview with the JoongAng Ilbo. “Spots [of cancer] also appeared in the lung. That’s when I intuitively realized that if I receive treatment, then I would have to only physically suffer before dying.”

Bok talked about his passion for his profession as a novelist, which he became in 1987 after working for a financial institution, a major corporation and a research institute. He studied economics at Seoul National University.

“The job of a novelist is different from what’s seen on the outside,” he said. “If you’re physically weak, then you’re not able to write. It’s difficult to receive treatment and write at the same time.”

Q. How is your health at the moment?

A. I’m OK. I’m able to write. Conditions of cancer don’t deteriorate in one or two months. With the current knowledge, we don’t really know why cancer occurs and how we should treat the illness. Medical studies advance after progress is made in evolutionary biology and changes are seen in the basic foundation of life. A society is healthy only when it is able to control groups that only pursue their own benefits. Cancer occurs when that controlling mechanism is out of order. The human body in the end is a society where cells compete.

That is why people receive surgery - to get rid of a malignant tumor.

I was diagnosed with liver cancer, and then it spread to the abdominal cavity. Spots also appeared in the lung. That’s when I intuitively realized that if I receive treatment, then I would have to only physically suffer before dying. I would say that the job of a novelist is different from what’s seen on the outside. If you’re physically weak, then you’re not able to write. It’s difficult to receive treatment and write at the same time. Let’s look at the senior writers. For five years, novelist Choe In-ho suffered from salivary gland cancer, and novelists Lee Chung-joon and Hong Sung-won had liver cancer. They were more talented writers than I am right now. But were there any memorable or impressive writings by them when they were receiving treatment? This is what writing is all about. I’m an economics major. I chose the best from what was given to me.

What has changed in your life since you were diagnosed with cancer?

The span of time shortens. I’m not able to think long and far. I might die tomorrow, which means that I’m insensitive to what might come one year after. What abruptly came to my mind recently was that a leader should not be sick. When you’re ill, you become annoyed with things except for those that are right in front of you. How would a leader care about a country when he or she is sick? Fortunately, for me, I was able to think long term because I write science novels. My job is to imagine the future, predict and fantasize. It’s very depressing to think that there’s no future and even for me it was most difficult overcoming that thought.

Despite your bad health, weren’t you able to write several books?

It was a must for me to write. When I refused to receive cancer treatment, I persuaded my wife by telling her that I will be writing unfinished books. Before I was sick, I wrote while taking care of other matters. When I had the opportunity, I went out, had several drinks. But now, I can’t put off my writing, because I don’t have any time left. Over a period of two and a half years, I wrote 10 books, which is three times more than what I wrote before I was diagnosed with cancer. People say that there’s nothing more useful than telling a person that they will die the next morning to get them to concentrate.

I cannot imagine what it would be like to live while at the same time being tied to death.

Most of my friends are 70 years old. Even though they’re older, would they live thinking about death all the time? My impression is that they all think about how to enjoy their lives better and what else they can do to be happy. They don’t believe that they would live forever, but that doesn’t mean that they set a time limit to their lives. It sounds like a contradiction, but this is what humans are all about. And that’s why it’s very difficult for me to accept the fact that I only have two or three years to live - at the longest. If I do decide to receive treatment, then it means that there’s 0.1 percent hope. But if I give up treatment, the percentage of hope is zero. My heart is able to understand and accept that, but not my body. On the day I found out about the illness, I was choking when I was lying in bed that night.

What do you mean that you were able to accept it in your heart, but not in your body?

I would say the heart is reason and the body is instinct. What I chose was peaceful death instead of suffering and an extending life. This, to me, was a logical and a rational choice. But then when I was lying in bed that night, the instinct to live just popped out of me. I closed my eyes, slept, but woke up again, and repeated that process. Then I found myself choking. It was a nightmare. I lived like that for more than a month. Then one morning, it rained. And I was able to hear the sound of a baby crying in the apartment. Then suddenly I thought about my parents, thinking that the grass on their graves would get wet. Then I cried. That moment, I was able to recite a poem by heart. To be honest I was so occupied with writing novels that I wasn’t able to keep a poetic heart, but that morning it just came with the outburst of my emotions. That’s the day when I no longer felt pain. It was all part of the healing process.

More than two years have passed since you were first told you had cancer. Aren’t you hopeful that you’ll survive?

I feel as though I’m lucky. I know that I might look OK on the outside, but on the inside, I know the condition I am in.

How did people respond after finding out about your illness?

For years I was criticized by many as a conservative pundit. So I thought many people wouldn’t care about my sickness. But I was wrong. One person called me and cried. Some people presented me with healthy food. I was very thankful. My heart was warmed. Their actions also brightened up the house. That’s when I realized that humans shouldn’t live alone but collectively. This is something that I had known very abstractly. Even at the age of almost 70, you learn and experience a lot. For those families of the Sewol ferry victims, I feel that the same can be done. The reality won’t change even if we do something, but if we cry with them, listen to them and nod, the pain in their hearts will heal, even just a little.