Ahn’s nominations cause schisms within NPAD

Ahn’s nominations cause schisms within NPAD 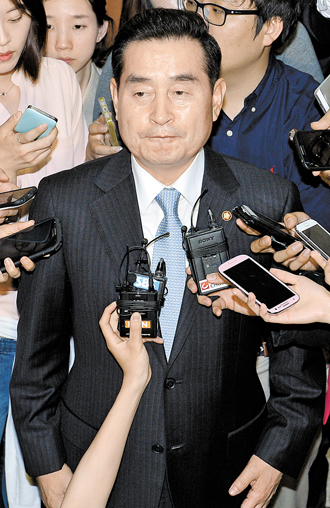 Lee Yoon-seok, the former spokesman for the NPAD, has a farewell briefing yesterday in the National Assembly. He resigned a day after he demanded party Chairmen Kim Han-gill and Ahn Cheol-soo leave the party. [NEWS1]

It looks like the wheels are falling off the New Politics Alliance for Democracy, the merger of the former Democratic Party and the supporters of liberal superstar Ahn Cheol-soo, over nominations for the June 4 local elections.

The internal rupture between the two factions has gotten so bad that the party’s spokesman Monday demanded Ahn and co-chairman Kim Han-gill leave the party before they caused any more bad blood.

“The two chairmen had better leave the party if they plan to continue to stir confusion [within the party],” snapped Lee Yoon-seok, a spokesman for the NPAD, during a party meeting at the National Assembly.

In a slap in the face to Ahn, the software mogul turned lawmaker who entered public life with a promise to bring about an era of so-called new politics, Lee said: “If you want to show [to the party and voters] your sincerity [for new politics], you should demonstrate principles while putting aside your ambition to run in the presidential election.”

Lee was angry with Ahn over the party nominations he influenced in South Jeolla. Lee is chairman of the South Jeolla headquarters of the NPAD. He stepped down as a party spokesman yesterday.

After the party meeting Monday, Ahn tried to shrug off mounting criticism of his influence on nominations for the June 4 local elections, saying he “predicted controversy over the nominations.”

The rupture in the NPAD is over what is perceived as Ahn’s unilateral decision to appoint nominations to people close to him regardless of their credentials.

The NPAD was launched in March as a merger of Ahn’s followers and the Democratic Party. Ahn has no prior experience with party politics, nominations and elections.

A case in point is a controversial nomination for the Gwangju mayoral election. The two top candidates in the eyes of party members are incumbent Mayor Kang Un-tae and Representative Lee Yong-sup. But Ahn handpicked Yoon Jang-hyun, who lagged far behind in third place in a popularity poll. No primary was held for the Gwangju mayoral race.

Clinching an NPAD nomination for Gwangju promises victory in the election since the city is an opposition stronghold.

The two are now in the process of fielding a united candidacy to challenge the NPAD’s Yoon. Critics say Ahn lacked consistency in handing out nominations and was only choosing people who were close to him.

“I have had to endure mounting humiliation to hide from the public that the nomination process has nothing to do with ‘new politics,’” wrote opposition lawmaker Park Soo-hyun, who presided over the party’s nomination process in South Chungcheong, on his Facebook page yesterday.

Party members are now turning their backs on candidates chosen by Ahn in the primaries, reflecting a growing discontent against the inexperienced lawmaker. Of the three candidates handpicked by Ahn to run in provincial primaries, all lost to former Democrats. Lee Seok-hyung, the former head of Hampyeong County supported by Ahn, was defeated in a primary last Saturday for the South Jeolla gubernatorial election.

In another party primary for the North Jeolla gubernatorial election, Song Ha-jin won the nomination yesterday by easily beating former Economy Minister Kang Bong-kyun, who was backed by Ahn.

On Sunday, Kim Sang-kon, former Gyeonggi education chief, who was handpicked by Ahn, lost to former Democrat Kim Jin-pyo in the primary for the Gyeonggi governorship.

His defeat is thought to have dealt a serious blow to Ahn’s leadership in the party.