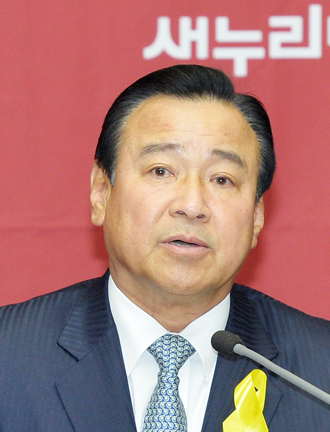 Representative Lee Wan-koo, the new floor leader of the ruling Saenuri Party, yesterday made a string of bitter comments about the Park Geun-hye administration, lashing out at cabinet members for their lack of authentic opinions, true expertise or responsibility.

His straightforward remarks come ahead of an imminent major reshuffle in the wake of the Sewol ferry tragedy on April 16, which is seen as the government’s way of assuming responsibility for its serious mishandling of the accident.

“The [reshuffled] cabinet members should consist of experts with a good sense of political affairs who can come up with comprehensive measures,” Lee said yesterday in an interview with a radio station. “I hope President Park hires those who have a serious view of the state and sense of duty.”

An emergency measures committee to fill that management vacuum was launched yesterday and will be operational until July 14, when the party convention will be held.

Upon his election as floor leader, Lee vowed to “call a spade a spade” when it comes to the president and her administration.

Despite the fact that the assignment of key government posts is the distinct right of the president, the outspoken floor leader yesterday also advised Park to start her cabinet from scratch.

“Since we are in an emergency situation, the reshuffling should be done to an extent that the people can understand,” he said, proposing that a major portion of cabinet members as well as Blue House officials be replaced.

But despite strong voices from the country’s political community urging President Park to be discreet in choosing candidates for key government posts, she has already come under harsh criticism for sticking to her convictions and tentatively designating former prosecutor Woo Byung-woo as the new secretary of civil affairs. He currently works as a lawyer.

In 2009, as a prosecutor, Woo investigated former President Roh Moo-hyun on bribery charges. A left-wing politician who stood opposite Park on the political spectrum, Roh committed suicide less than a month after the probe.

The prosecution was later accused of being too harsh on the late president, and the central investigation department - one of the most powerful within the prosecution to which Woo belonged - was abolished last year.

Park Young-sun, the new floor leader of the main opposition New Politics Alliance for Democracy (NPAD), said yesterday that she was concerned that Woo’s appointment indicated that the Blue House was taking public anger over the Sewol accident too lightly.

President Park also presided over a cabinet meeting yesterday to discuss with ministers the content of an address she will deliver “soon” regarding the Sewol, plans for a new safety system and the government overhaul. The brain-storming session lasted almost three hours and the president mostly listened to ministers’ opinions, according to the Blue House.

The meeting follows the impromptu session she arranged with her senior secretaries on Sunday to talk about the upcoming address, which sources say may come early next week, which is later than expected.