Eight injured in blast at copper factory in Ulsan

Eight injured in blast at copper factory in Ulsan 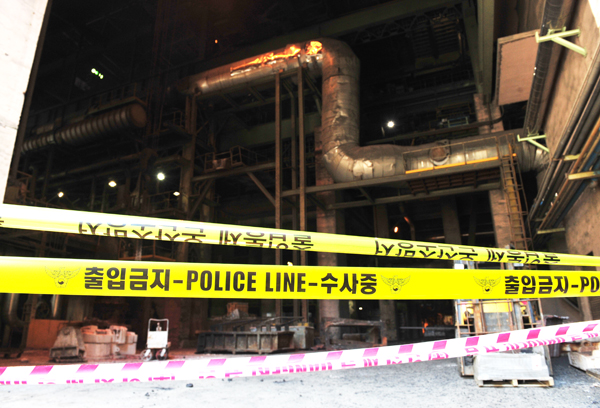 An explosion broke out at copper smelting factory owned by LS-Nikko Copper yesterday in Ulju, Ulsan. The photograph provides an inside view of the factory after the accident. Eight people were injured. [NEWSIS]

An explosion from a blast furnace yesterday morning in an LS-Nikko Copper smelting factory in Ulsan left one worker severely injured and seven others with slight burns, according to police.

The accident, which occurred around 8:54 a.m. while the factory was conducting repair work, is presumed to be the result of a vapor explosion in a blast furnace, in which copper is extracted from ore. The sudden inflow of cold water onto molten copper heated to 1,200 degrees Celsius (2,192 degrees Fahrenheit) is believed to have caused the explosion, police said.

“The principle is the same as that of an explosion caused by water flowing into boiling oil,” said Min Byeong-hee, the chief official in the crime department at the Ulsan Ulju Police Station. “The liquid copper and the water reacted and resulted in a vapor explosion,” he said.

The victims’ injuries were reportedly not life-threatening and they are currently receiving medical treatment. The most seriously injured worker, a 33-year-old employee only identified by his surname Huh, was transferred to Ulsan University Hospital.

“The accident happened while the furnace was being replaced and the workers were burned by the hot vapor,” said Kim Seong-su, from LS-Nikko Copper.

After the incident, work at the factory was immediately suspended on the orders of the Ministry of Employment and Labor in Ulsan.

LS-Nikko Copper is a subsidiary of LS Group. The factory in Ulsan where the explosion occurred is responsible for more than half of the group’s total copper production.

Authorities are currently conducting an investigation to determine the exact cause of the accident. The police and the National Forensic Service are also looking into the explosion.

Police said they plan to take judicial action if they find that lax safety management or subpar facilities played a role in the blast.

The explosion at the copper factory follows a fire last month at Hyundai Heavy Industries’ shipyard in Ulsan, which left two dead and two injured.

According to the Ulsan Fire Department, the fire started at 4:04 p.m. at the company’s No. 5 dock, which is where liquefied petroleum gas carriers are built. Hyundai Heavy Industries is the world’s largest shipbuilder.