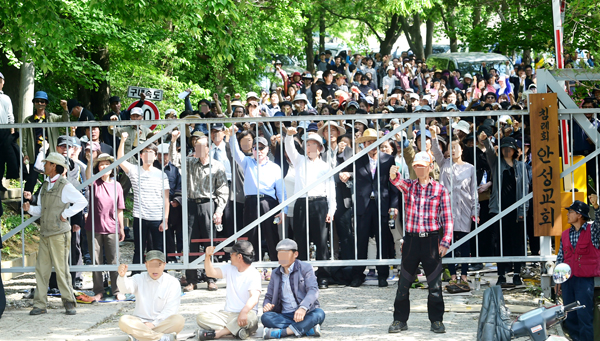 As the prosecution searches for Yoo Byung-eun, the de factor owner of the operator of the sunken ferry Sewol, some believers of the Evangelical Baptist Church, which Yoo founded, stage a rally at the church’s headquarters in Anseong, Gyeonggi, claiming the church had nothing to do with the ferry accident. [NEWSIS]

The family behind the company that operated the sunken Sewol ferry continued to stonewall investigators yesterday. Prosecutors failed to arrest the oldest son of family patriarch Yoo Byung-eun in Seoul and aren’t even sure where other family members are.

A group of prosecutors and police officers visited the residence of 44-year-old Yoo Dae-gyun, the eldest son of the family, in Seocho District, southern Seoul, yesterday, bringing arrest and raid warrants issued by a court for tax evasion and embezzlement.

Firefighters forced open a locked door and the team stormed the house to search for the son. However, as of press time, they did not find him.

A male worker who identified himself as a gardener told them that Yoo was not in the house.

“It is regrettable that Yoo Dae-gyun, who refused to attend questioning yesterday [Monday], tried to avoid us,” a prosecution official told reporters at a briefing yesterday. “We are taking proper measures against that.”

The prosecution also yesterday summoned patriarch Yoo Byung-eun for questioning this Friday. The elder Yoo is known to be the de facto owner of the operator of the ferry, the Chonghaejin Marine Company.

“We demanded Yoo Byung-eun attend questioning as a suspect at 10 a.m. this Friday,” the prosecution official said. “All of Yoo’s children, including the first son, are also required to appear for questioning in order to resolve all public mysteries and cooperate with us in the probe.”

The oldest son is a major shareholder of I-One-I Holdings, the holding company of the operator of the Sewol, the Chonghaejin Marine Company and two other affiliates, Dapanda and Trigon Korea.

Authorities allege that the son illegally pocketed tens of billions of won in company funds and set up a shell company in order to facilitate or conceal financial irregularities committed by the elder Yoo.

Prosecutors are trying to verify the company structure and the use of company funds to figure out if the owner is responsible for the ferry’s poor safety management, including overloading of the Sewol, which may have contributed to the maritime disaster.

The disaster killed 276 people and 28 are still missing as of yesterday evening.

No member of the Yoo family has appeared for questioning as of yesterday. Prosecutors told reporters they were not even sure where the family members were.

“We are doing our best using various sources to figure out their whereabouts,” another prosecution official said.

Second son Yoo Hyeok-gi and two daughters have ignored notices from the prosecution. They are reportedly in the United States.

On Monday, the prosecution sent a senior prosecutor and several investigators to the headquarters of the Evangelical Baptist Church in Anseong, Gyeonggi, which the patriarch founded and allegedly leads, suspecting the eldest son and father could be hiding there.

The headquarters, called Geumsuwon, is located in a remote mountainous area and protected by barbed-wire fences and surrounded by old, used Seoul Metro trains. It’s thought that the sect’s adherents hold religious ceremonies and sleep inside the subway cars.

Officials of the church refused to open the main gate of the headquarters when the prosecutor and investigators visited Monday, saying the Yoos were not there.

About 50 adherents of the sect held a rally right inside the main gate and brought about 40 vehicles to block the gate.

They claimed the prosecution was trying to crack down on the church, which they say had nothing to do with the Yoo family or the sinking of the ferry.