At an 11 a.m. press conference yesterday at the JS Football Center in Suwon, southern Gyeonggi, with his parents at his side, the 33-year-old midfielder announced he was leaving the game, talked about his feelings and briefly explained his future plans to about 50 assembled members of the media.

Last week, Park called the news conference, saying only that he would discuss his future. But those arriving at the center knew what was to come when they were greeted by a banner that read, “Thank you very much, fans, for your endless and great support,” and a display of Park’s jerseys from the Korean national football team, PSV Eindhoven and Manchester United.

“I have decided to end my career as a football player today,” Park said. “I have considered retirement since February and I decided to wrap up my career because I think I’m not capable of playing football, as my physical condition has worsened every year due to several injuries, including the right knee injury that has sidelined me many times over the past few years.

“I’m not sad and I don’t feel like I’m going to cry now, but I’ll always wonder what it would have been like if I had been able to play a little longer. As a football player, however, I consider myself the luckiest of men, as I achieved many more things than I had expected.” 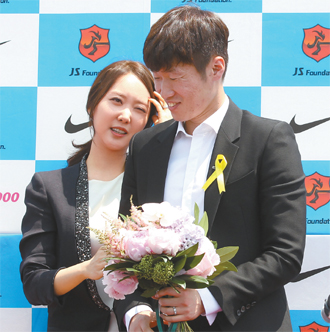 After announcing his retirement yesterday, Park Ji-sung receives a bouquet of flowers from his bride-to-be, Kim Min-ji, at the JS Football Center in Suwon, Gyeonggi. Park said they will wed on July 27. By Kim Jin-kyung

Before the 2002 Korea-Japan World Cup, Park wasn’t a familiar face to fans. Few people knew he had been a member of the 2000 Sydney Olympics team or that he played for Kyoto Sanga F.C. in Japan. But he soon made a name for himself in two friendly matches in May right before the 2002 World Cup. He scored an equalizer against England with a header in the 51st minute, then scored another equalizer against France when Korea was behind 1-0. Many fans were skeptical whether tournament host Korea could advance to the second round, but his performance against strong European nations in friendly matches raised hopes.

And Park responded perfectly to the expectations. In the Group D final match against Portugal on June 18 at Munhak Stadium in Incheon, he scored a stunning volley shot with his left foot that gave Korea the 1-0 victory and put the Taegeuk Warriors in the second round (top 16) of the World Cup for the first time ever. After Korea finished fourth in the World Cup, he joined PSV Eindhoven under Coach Guus Hiddink, who had managed the Korean team.

The most impressive moment for Park in the PSV was the second leg match of the semifinals of the UEFA Champions League against AC Millan of Italy on May 4, 2005. PSV lost 2-0 in the first leg match, so it needed to win by a lot. After passing the ball to teammate Jan Vennegoor of Hesselink, he penetrated the left edge of AC Millan’s goal area then blasted a shot into the net after a return pass from Vennegoor of Hesselink.

Though PSV failed to advance to the final despite the 3-1 victory in accordance with UEFA rules that give an advantage to a team that scored more goals at away matches, Park’s excellent performance and seemingly endless stamina got the attention of Manchester United manager Sir Alex Ferguson, who attended the match.

“In my club career, the match against Millan was one of my greatest moments,” Park said. “Another one was when I earned the last championship trophy in the Premier League with United.”

Park started wearing a yellow captain band on his left arm in a friendly match against Uzbekistan in October 2008 that Korea won, 3-0. Fans soon started calling him “Captain Park” and the nickname stuck even after he retired from the national team in 2011.

His excellent performance and contributions to the team resulted in many accomplishments for the national team, including when Korea advanced to the second round (top 16) in the 2010 South Africa World Cup for the second time. Park scored in a 2-0 victory against Greece, becoming the only Asian player to score a goal in three consecutive World Cups.

But each time he had an A-match in Korea, he had to take an 11,600-mile round-trip flight from England to Seoul and the hectic schedule was considered a major cause of Park’s trouble with his knee.

“My biggest dream was to become a national team member,” Park said. “It was my honor to be part of the country’s football history. When someone asks me to choose my favorite jersey, it will always be the one that I wore with the national team.”

The biggest reason for Park’s decision to leave football was his right knee, which sidelined him repeatedly in the past decade. In March 2003, when he played for PSV, he had his first operation on the knee to remove a cartilaginous plate. During his time with United, he underwent surgery in 2007 to regenerate cartilage.

In the 2012-13 season, he became the first Asian captain ever in the English Premier League with the Queens Park Rangers, but missed three months when he again hurt his right knee. He also missed some early matches this season with PSV, and Netherlands media reported that Park’s knee was a time bomb that could detonate at any time. When the Korean national football team struggled earlier that year, Coach Hong Myung-bo said he might consider asking Park to join his squad, but he dropped the idea after meeting with Park in England.

As for his future plans, Park said he isn’t interested in coaching. “I clearly and consistently have said I will never be a coach, and that’s why I don’t even have a coaching license. I’m interested in working in an administrative position in football, but because I’m not ready yet I need some time to develop a specific plan and study for that goal.”

Park will organize a charity game in cooperation with the K-League Classic on July 25, and it will be his last match. “I will be honored if fans remember me as a player they could trust in any football situation,” Park said at the conclusion of yesterday’s press conference. “If you ask me to rate my career, I think I can give myself a seven out of 10, because I still see many ways I can improve as a football player.”