Rangers in finals as goalie fends off Penguins

Rangers in finals as goalie fends off Penguins 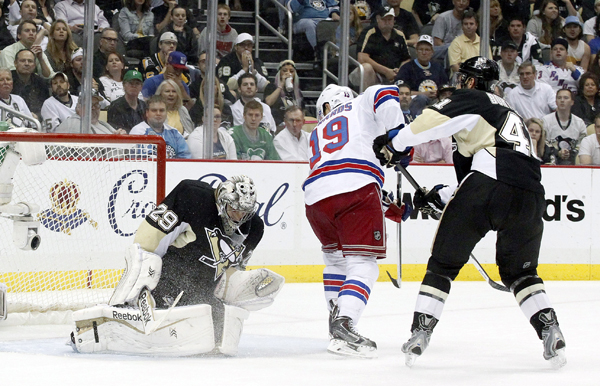 Pittsburgh Penguins goalie Marc-Andre Fleury makes a save against New York Rangers center Brad Richards as Robert Bortuzzo defends during the first period in Game 7 of the second round of the Stanley Cup Playoffs at the Consol Energy Center on Tuesday. [USA TODAY/NEWS1]

“He’s OK,” Vigneault said finally with a small shake of his head.

Except that is, in Game 7s. In Game 7s, Lundqvist is unbeatable.

And so are the Rangers.

Frustrating Sidney Crosby and the reeling Pittsburgh Penguins one final time, Lundqvist made 35 saves to lift New York to a 2-1 win on Tuesday night and give his resilient team an unlikely spot in the Eastern Conference finals.

“I was so tired at the end,” Lundqvist said after setting an NHL record with his fifth straight Game 7 triumph. “ But it was just a great feeling when you know it’s a done deal and we did it.”

Brian Boyle and Brad Richards scored for New York, which rallied from a 3-1 series deficit for the first time in the franchise’s 88-year history.

The Rangers did it behind Lundqvist, who stopped 102 of the final 105 shots he faced over the final three games as New York advanced to the conference finals for the second time in three years.

The three-time All-Star is 10-2 when facing elimination.

He was at his best during a mad scramble in front of the Rangers’ net with just over five minutes left, when he turned aside three shots from three different angles in a matter of seconds to preserve a one-goal lead.

“He was OK with guys being on top of him as long as we didn’t take penalties,” New York defenseman Ryan McDonagh said. “He fought through screens, fought for loose pucks. He was incredible.”

The Rangers will play the winner of the Bruins-Canadiens series in the conference finals. That series is tied 3-3 and Game 7 is Wednesday night in Boston.

Jussi Jokinen scored his team-high seventh goal of the postseason for the Penguins. Marc-Andre Fleury made 18 saves for the Penguins, who outshot New York 36-20, but were outscored 10-3 over the final three games.

Pittsburgh fell to 2-7 all time at home in Game 7s, including three such losses in the past five seasons.

This one might have been the most painful for the core of Crosby, Evgeni Malkin and coach Dan Bylsma that seemed pointed toward a dynasty after winning the 2009 Stanley Cup.

Crosby, who led the league in scoring and is an MVP finalist, managed just one goal in 13 playoffs games.

Just as importantly, five springs have now come and gone without Pittsburgh getting a Cup to bookend the one they hoisted in Detroit.

The Penguins are just 4-5 in playoff series over the past five seasons, with each loss coming to lower-seeded teams. Not exactly the expected outcome for a roster scattered with top-end talent that hasn’t met expectations.

While Bylsma declined to take the wide-angle view, his captain understood the dressing room could have a very different look next fall.

“I think there’s always questions,” Crosby said. “When expectations are high and you don’t win that’s normal. I’m sure there will be a lot of questions.”

There are none at the moment for the Rangers, who seem to thrive when their season boils down to three periods of hockey.

Faced with their fifth Game 7 in the past three years, they did what they always do and took control early.

Boyle quieted a raucous crowd 5:25 into the game at the end of a pretty breakout.

Derek Dorsett hit Boyle streaking across the Pittsburgh blue line and Boyle tapped it between his legs to Dominic Moore, who waited a split second before sending it back to Boyle.

The veteran forward’s shot went between Fleury’s legs for his second goal of the postseason.

The Penguins responded by briefly taking over the game, their momentum cresting 4:15 into the second period when Jokinen pounded home a rebound off an Olli Maatta shot to tie the game.

The goal seemed to get the Penguins almost too keyed up. Matt Niskanen went to the box for tripping and New York’s power play, which was laughable when the series began, provided the clincher.

Pittsburgh’s Brian Gibbons failed to get his stick down on a crossing pass from Brandon Sutter, nullifying a short-handed chance.

The Rangers took off the other way, and with the Penguins still scrambling to get back into position, Richards took a pass from Martin St. Louis and flipped it into a wide-open net to make it 2-1 before the game’s midway point.

Lundqvist did the rest.

He robbed Pittsburgh’s James Neal at the doorstep late in the second period and fought off swarm after swarm over the final 20 minutes as the Rangers beat the Penguins in the playoffs for the first time in five postseason meetings.