Stop talking about our ferry tragedy

Stop talking about our ferry tragedy 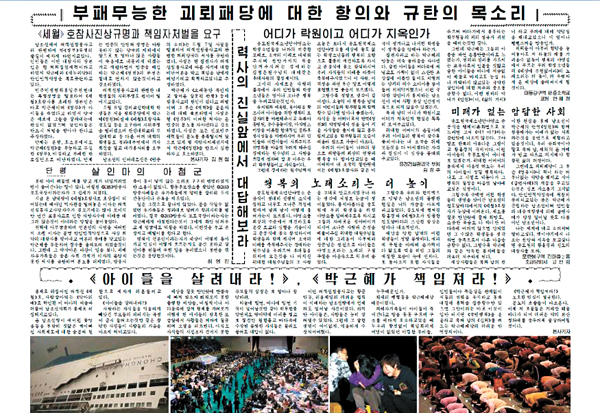 North Korea is increasingly using inappropriate language when discussing the Sewol ferry tragedy. On May 13, the Rodong Sinmun wrote, “South Korean society is turning upside down with the Sewol ferry” and “The Blue House should burn down completely.”

On March 11, the National Defense Commission, the most powerful agency in the North, tastelessly said that the victims had become “fish food.” They even announced, “It has become clear which side is paradise and which is hell.”

Immediately after the accident on April 16, North Korea didn’t hesitate to make character assassinations on President Park Geun-hye. When its inappropriate attitude was criticized, the North Korean Red Cross sent a short letter of sympathy, saying, “We express condolence for the victims killed or lost in the accident, including young students.” But this didn’t last.

The South is certainly in crisis. We are discussing reform and renovation. Citizens nationwide, not to mention the families and friends of the victims, are in tremendous pain. We are grieving the losses and don’t know when this tragedy will end. Is making fun of the victims and attacking the government all the North can do for the South?

Ten years ago, a train loaded with chemical products exploded at Yongchon Station in the North. More than 160 people, including students at nearby elementary schools, were killed in the accident. The North Korean authorities struggled with emergency rescue and recovery operations, and it was the South Korean government and its people that offered help before anyone else.

Medical supplies for burn victims were provided, and building materials and forklifts were sent. Students returned to school thanks to the chairs, desks and chalkboards provided by the South. The North Korean authorities need to think about how they would have felt if Seoul raised its voice in criticism and insisted that the Yongchon explosion would lead to the fall of the Kim Jong-il regime.

On President Barack Obama’s visit to Seoul, a North Korean government organ made racist comments on May 2 about the U.S. leader. When America showed its aggravation at the inappropriate statements made, the North’s Foreign Ministry backed off and said on May 12 that “some individual residents expressed their anger at Obama.”

North Korean authorities need to stop talking about the Sewol ferry disaster. Even they don’t really believe that the South Korean government could fail as easily as they hope. Kim Jong-un, chairman of the National Defense Commission, is a father of two young daughters. He should find some empathy and order the Workers’ Party strategists to stop its tasteless demagogy and attacks.

*The author is a political and international news reporter of the JoongAng Ilbo.