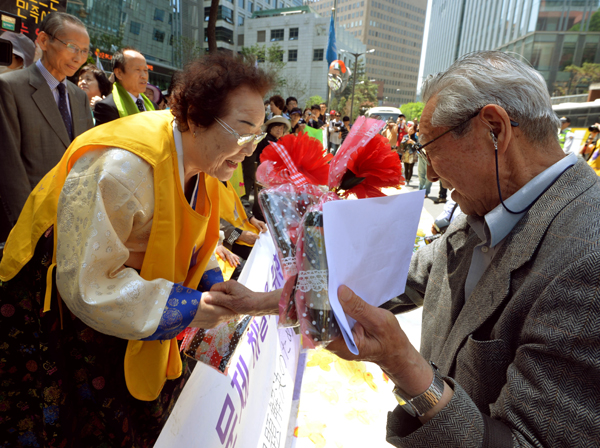 Ito Narihiko, right, professor emeritus at Chuo University, presents a carnation and gift yesterday to Lee Yong-su, left, an elderly Korean woman who was forced into sexual slavery by the Japanese military during World War II, as a token of apology for Japan’s wartime atrocities at a Wednesday rally in front of the Japanese Embassy in Seoul. [NEWSIS]

Prime Minister Shinzo Abe is set to announce today his government’s basic stance on how Japan will exercise the right to collective self-defense should a decades-long constitutional ban be lifted, a sensitive issue Seoul is following carefully.

The hawkish Abe has pushed for a new interpretation of the constitution that would allow Japan to gain the rights to collective self-defense, or the ability to deploy troops to aid allied countries even in cases where Japanese territory is not threatened.

However, this would require a flexible reinterpretation of Article 9 of Japan’s pacifist constitution, which stipulates that “the Japanese people forever renounce war as a sovereign right of the nation and the threat or use of force as means of settling international disputes.”

A key advisory panel, led by Shunji Yanai, a former ambassador to the United States, is scheduled to submit a report to Abe this morning that is expected to push for an end to the ban on Japan’s rights to collective self-defense through a reinterpretation of the constitution.

The report is expected to cover key issues on the rights to collective self-defense, collective security and how to cope with so-called gray zone situations - specifically, how to handle security threats that may occur in disputed territories like the Senkaku Islands, which China calls Diaoyu.

Japan’s Asahi Shimbun wrote yesterday that the report will criticize past postwar administrations for sticking to an inflexible interpretation of Article 9 of the constitution, which only allowed for the minimum required level of self-defense, calling it “a violation of the security of the people.”

It added that it obtained a draft of the report by the Advisory Panel on the Reconstruction of the Legal Basis for Security, which states, “There has never been any demonstration of whether the survival of the people could be protected and the existence of the nation could be ensured within the limits of a minimum required level of defense.”

It further states that Japan needs to regain rights to collective self-defense because of the changed security environment in the region, including North Korea’s nuclear threats and China’s increased defense spending.

After the report is submitted, Abe will announce today his basic defense policy plans in a press conference, according to Chief Cabinet Secretary Yoshihide Suga, his spokesman.

Suga said that should the interpretation of the constitution be changed, Abe will seek Cabinet approval before a debate in the National Diet.

Abe had initially planned to obtain Cabinet approval in the current Diet session, which is scheduled to come to a close on June 22, but this appears to be difficult, according to Japanese media.

Washington has voiced its support for Japan’s move, but Seoul and Beijing have trepidations in light of Tokyo’s rising militarism paired with its leadership’s actions and remarks that seem to deny its wartime aggression.

The Asahi Shimbun reported that legal scholars are “aghast at the conclusion” and said that Abe’s advisory panel “seemed set on ‘destroying’ the constitution that has kept Japan in postwar peace.”

“The [Japanese] Self-Defense Forces will not be allowed on our territory under any circumstances without our permission,” a Korean foreign affairs official said.

In particular, Korea will monitor how Abe approaches exercising collective self-defense when it comes to the Korean Peninsula.

Japan and Korea are also holding their second round of working-level talks concerning the Japanese Imperial Army’s forceful recruitment of Korean women and girls into sexual slavery during World War II.