Chung resigns as rep to go on attack against Park

Chung resigns as rep to go on attack against Park 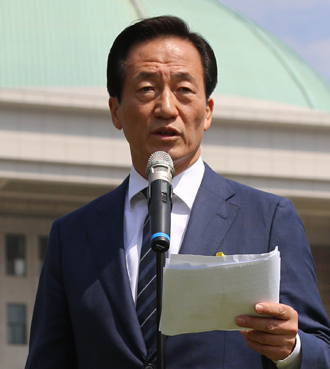 Chung Mong-joon, the Saenuri Party’s contender for Seoul mayor, resigned from his National Assembly seat yesterday to start a career-defining campaign to wrest control of the city from incumbent Park Won-soon of the New Politics Alliance for Democracy.

On the lawn in front of the National Assembly building yesterday, Chung told reporters and supporters he was ending his nearly three decades as a lawmaker to join the Seoul mayor race. Chung, the son of Hyundai Group founder Chung Ju-yung, was the longest-serving politician among lawmakers elected in the 2012 general election, serving seven terms.

“Looking back at the 27 years that I spent as a politician, our politics have experienced many changes and achieved peaceful transitions of power [in the Blue House] twice,” said Chung, who won the ruling party’s nomination for the mostly closely watched race in the June 4 local elections Monday.

“I hope to use my 27 years of experience at the National Assembly in better serving the city as a Seoul mayor. I will protect the safety and the lives of Seoul citizens.”

Chung is giving up the National Assembly badge that he has worn for 27 years because sitting lawmakers must resign their seats 20 days before an election to a public office. Chung, the richest lawmaker in the National Assembly, is staking his political career on the race that pits him against former human rights lawyer Park.

To show his resolve, Chung launched his offensive just minutes after he clinched the nomination Monday. During a press briefing after the party primary, the former presidential hopeful said Park was much better at pointing out mistakes in the city’s governance than fixing them because he spent many years as a civic activist, not as a politician. Chung expanded his criticism of Park yesterday, saying he neglected the health of Seoul citizens by doing nothing to improve the air quality in the city’s subways.

“After platform screens were installed [to prevent suicides] four years ago, the air quality in subway cars has deteriorated so much,” Chung said. “But the Seoul city government has done nothing except taking air-quality tests once a year.”

Chung’s citing of the Seoul subway system was seen as a reminder to voters of the collision on May 2 on Seoul Metro’s line No. 2.

Mindful of attacks from Chung on safety issues, Park paid a visit to the Seoul Emergency Operations Center yesterday, which was his last act as mayor. Park’s mayoral duty will be suspended starting today as he is expected to register with the National Election Commission to run in the race.

Park’s lead in popularity ratings has widened amid the public’s disappointment with the ruling party and the government in the aftermath of the April 16 Sewol sinking.

In a survey of 800 adults in Seoul, Park led with 47.4 percent compared to Chung’s 37.7 percent, widening the gap by 3.3 percent from a survey conducted a week earlier.

The public’s disapproval of the government’s handling of the Sewol disaster is becoming a major factor in the local election campaign, especially in Seoul and its surrounding areas, sparking fears within the ruling party that it may lose three important races to the NPAD: Seoul mayor, Gyeonggi governor and Incheon mayor.

In the same survey of 800 eligible voters in Gyeonggi, Kim Jin-pyo of the NPAD narrowed his gap with the Saenuri’s Nam Kyung-pil by 8.6 percent over a one-week period in the Gyeonggi gubernatorial election, trailing with 29.1 percent to Nam’s 36.4 percent.

For the Incheon mayoral race, sitting Mayor Song Young-gil led Saenuri candidate Yoo Jeong-bok with 38.6 percent to 33.5 percent, a turnaround from the survey conducted a week earlier in which Song trailed with 34.8 percent to Yoo’s 38 percent.