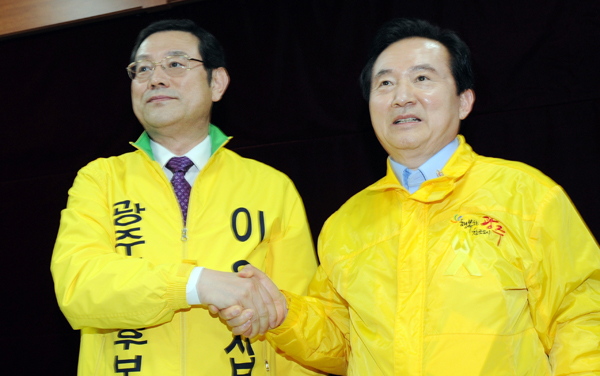 In defiance of opposition leader Ahn Cheol-soo’s intention of giving the Gwangju mayoralty to an ally, incumbent Mayor Kang Un-tae and independent lawmaker Lee Yong-sup agreed yesterday to go into an electoral alliance to contest the election.

The decision by Kang and Lee to challenge Ahn’s handpicked candidate, Yoon Jang-hyun, is expected to further undermine the liberal superstar’s political sway within the New Politics Alliance for Democracy - especially if Yoon loses in the June 4 local election.

“We decided to form a unified candidacy to defeat the candidate nominated by the New Politics Alliance for Democracy, which was made through a closed-door process that disgraced the citizens of Gwangju,” said the two liberals in a joint statement released yesterday. The two left the country’s second largest party in protest of Ahn’s awarding of the nomination to Yoon. Kang and Lee said they will decide who will run by no later than May 28.

The decision will be made by a public opinion poll of average citizens in the city. Gwangju is a liberal stronghold and the most popular liberal candidate is guaranteed to win the mayoral race. Ahn’s decision to anoint Yoon as the NPAD candidate without holding a primary was seen by many as an attempt to give a close aide a safe elected position. But Kang and Lee, the top two candidates in the eyes of NPAD members, refused to go along with Ahn and the party he co-leads. In a recent opinion poll in the city, Yoon lagged far behind Kang and Lee.

Despite his stature as co-chairman of the NPAD, Ahn failed to stop the two from leaving the party and disrupting the Gwangju mayoral race. The NPAD was launched in March through a merger between the Democratic Party and Ahn’s followers.

Gwangju’s mayoral election is not the only race that has raised the ire of former Democrats at Ahn. In 17 metropolitan and provincial elections, Ahn handpicked four of his allies to run in elections. Aside from Yoon in Gwangju, the other three allies lost their primaries to former Democrats.

Ahn entered public life with a promise to usher in an era of “new politics.”