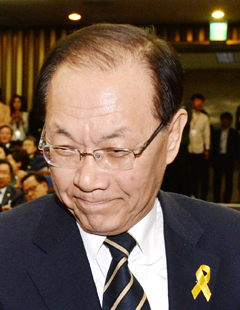 Saenuri Party Chairman Hwang Woo-yea finished his two-year term yesterday and handed over leadership to newly elected floor leader Lee Wan-koo, who will be acting president until the party picks a new head at a convention on July 14.

Hwang was the first chairman of the conservative party to complete a full term since 2000. His predecessors were forced to step down for various reasons or controversies.

The 67-year-old judge turned five-term lawmaker was elected at a party convention on May 15, 2012, a month after the party’s successful performance in a general election. He previously served as floor leader for a year and his elevation to the chairman’s post was largely due to strong support from the pro-Park Geun-hye faction in the ruling party. President Park was head of an emergency measures committee at the time.

“Please cheer up floor leader Lee, who is guaranteed a bumpy road in the future,” Hwang told party members at the National Assembly yesterday. “I also hope you give candid advice to the new leader.”

Hwang assumed a new post yesterday as joint head of a committee to prepare the party for June 4 local elections. He also said it was his goal to become the next National Assembly speaker. The incumbent speaker’s term ends May 29 and Hwang will run against Chung Ui-hwa, a five-term lawmaker also of the Saenuri, in an election scheduled for the end of this month.

Political analysts said one of Hwang’s major achievements was the passage of the National Assembly Act Article 85, widely dubbed the National Assembly advancement law. Meant to prevent physical altercations on the Assembly floor when the ruling party used its majority to push bills into law, the act went into effect on May 30, 2012. The ruling party is prohibited from railroading bills under the article, and there have been none of the brawls that were so common in the Assembly in the past. But many bills have also been held up.

Some analysts say Hwang was notably passive when the ruling and opposition parties clashed over such sensitive issues as the missing transcripts of an inter-Korean summit meeting in 2007 and the National Intelligence Service’s alleged political interference.