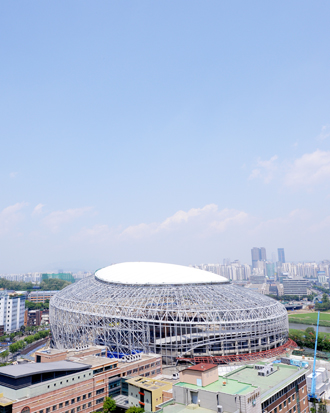 The Gocheok Dome in Guro District, northwestern Seoul, will be the country’s first covered baseball stadium when it is completed in February. [NEWS1]

Will the Gocheok Dome, Korea’s first covered baseball stadium that is projected to be completed in February, have a team? Maybe.

Oh Se-jung, director of the Seoul Metropolitan Government’s Sports Promotion Department, said yesterday the Nexen Heroes, who play their home games at Mokdong Baseball Stadium in western Seoul, have tentatively agreed to move to the Gocheok Dome next season.

“It is true we have agreed on the big picture, though we have smaller details to discuss in order to finalize the deal,” said Oh. “We have been speaking with the Heroes for the past few months.”

The 220 billion won ($191.8 million) baseball field has been considered one of the municipal government’s white elephants as it has so far failed to lure one of the three Seoul-based teams: the Heroes, LG Twins and Doosan Bears.

The Gocheok Dome was spearheaded by former Seoul Mayor Oh Se-hoon in 2009. The city began building the 22,238-seat covered stadium on a 57,261-sqaure-meter (13-acre) site in Guro District, northwestern Seoul.

However, some wonder how many people will make the trek to the outskirts of Seoul to see a game. Fans in southern or eastern parts of the city would have to travel more than an hour to get there.

If they take public transportation, the only option is subway line No. 1, the oldest line in the country. In addition, the stadium is a 15-minute walk from Guil Station, the stop for Gocheok.

In contrast to the city’s optimism, the Heroes say there are mountains of problems to solve before making a move.

“Nothing has been decided yet,” said a team spokesman. “There are many preconditions to that contract, including an issue over amateur baseball.”

The city government plans to hold a series of amateur baseball events when the Heroes don’t have games, but the team says that is unacceptable.

“We understand about having some international events or semifinals and finals of major domestic amateur events, but we can’t share the field all season long because we need to keep it in the best shape to host fans. The stadium must be designated for professionals,” said the spokesman.

The other concern is business rights within the ballpark, including revenue from advertising inside the stadium.

“For the brand-new Gwangju-Kia Champions Field, for instance, the Gwangju city government gave all business rights for the ballpark to the Kia Tigers for 25 years,” said the Heroes spokesman. “It is because Gwangju officials considered the field a public property that people share and they thought the Tigers could offer the best services to fans. But I think the city government sees the Dome as something it could earn some money from.”

The city government manages Jamsil Baseball Stadium in Songpa District, southeastern Seoul, which was built in 1982 at a cost of 12.6 billion won. It has been a golden goose, generating billions of won in revenue every year.

In each of the past two years, the two Jamsil-based teams - the Bears and the Twins - paid a total of 3 billion won to use the stadium. The stadium’s advertising, which includes banner and electronic display ads, generated 7 billion won.

“There are things we can’t give up because the Dome was built with taxpayers’ money,” said Oh. “But we are trying to find the best solution for such issues.”