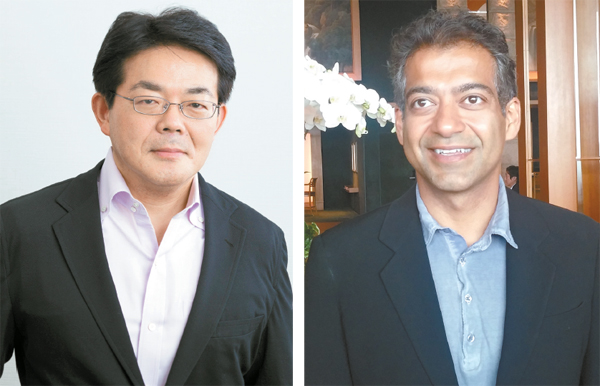 Global venture capitals are focusing on Korean start-ups as Asia’s largest annual start-up conference, beLaunch 2014, is under way in Korea. The JoongAng Ilbo had a chat with two venture capital groups on Wednesday at the event at Dongdaemun Design Plaza, northeastern Seoul.

Ravikant, an investor who specializes in start-ups, said Korea has “many innovative and passionate entrepreneurs.” He mentioned Viki, the global video streaming service with subtitles in more than 160 languages, which was co-founded by a Korean couple who studied at Stanford University in 2010.

He said that widespread Internet access is a huge contributor to the start-up trend.

“I visited Seoul 10 years ago thinking I might be able to see a future society where new technologies are realized,” Ravikant said. “Entrepreneurs will be able to come up with explosive start-ups if they create content with the mind that what is happening in Korea right now will also happen in other countries in the future.”

He added that collaborative work between global hardware manufacturers such as Samsung and LG and software start-ups could have a huge influence in the market.

Ravikant said that Korea should adopt a risk-taking culture in which entrepreneurs keep trying new business ideas by overcoming their failures.

“Those about 200 people who continuously take the challenge to start their businesses again after failure lead the start-up ecosystem in Silicon Valley,” he said.

If 20 people out of the Korean population of 50 million take up the same challenge, Korea could become a start-up stronghold as competitive as Silicon Valley, he said.

Ravikant, an Indian American, is a long-time observer of start-ups, and has invested in Twitter and Yammer, a messenger service acquired by Microsoft. His company AngelList, often referred to as the cradle of start-ups, is an online platform that connects investors looking for promising businesses with start-ups in need of investment.

“Korea is a nation with a magnificent mobile ecosystem, including two global handset makers,” said Yurimoto of Global Brain. “Korean start-ups are already making the best of these advantages.”

Yurimoto said Korea’s young entrepreneurs have better communication skills than those in Japan, and also have a more global mindset.

After seeing the skills and passion of Korean entrepreneurs at past beLaunch events, the Japanese investor met with Lee Chang-su, CEO and founder of 5 Rocks, a Korean mobile data analysis start-up, and decided to invest about 2.6 billion won ($2.53 million) to help the company break into the Japanese market.

At this year’s event, Yurimoto announced that his company will invest in another Korean IT start-up called VCNC. The company developed Between, a closed social network service only for couples, which has seven million users worldwide and one million downloads in Japan.

“We will keep increasing to include a variety of partners and provide assistance to competent Korean start-ups to expand their business in Japan and the global market,” he added.

“Receiving investment from foreign venture capitals helps us a lot in global expansion, because it is seen as verification that we are a promising start-up,” said Park Jae-wook, CEO of VCNC.

However, the two experts mentioned a few hurdles that Korean start-ups have to overcome.

Ravikant said that start-ups in Korea lean too much toward mobile gaming apps and media. He advised Koreans to focus on tech-based start-ups and business ideas that apply to the entire Asian market, not just Korea.

He added that the government should continue its deregulating policies for start-ups.

“Start-ups are companies with no factory,” said Ravikant. “So they can go to a country with a better start-up business environment whenever they want.”

He said the government should implement policies to encourage the private sector to form start-up strongholds where global entrepreneurs will flock to, such as Bangalore in India, Berlin, Tallinn in Estonia and London.

Ravikant said a government focus on creating an investment-friendly business environment for private sectors would be the best way to strengthen Korea’s start-up ecosystem, not making direct investments in start-ups.