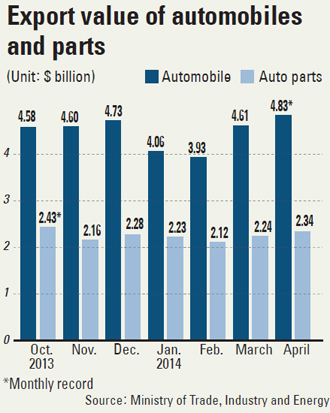 Korean-made automobiles recorded their best month ever in terms of overseas sales revenue in April, according to data from the Ministry of Trade, Industry and Energy.

The ministry said domestic atomakers raked in $4.83 billion, up 18.9 percent from April 2013. The previous monthly record was $4.73 billion in December.

In the first four months of this year, Korean automakers sold $17.4 billion worth of vehicles overseas, up 8.9 percent from a year earlier.

The ministry said that new models released by Korean automakers, combined with a rise in the average price of cars led to the higher figure. The average selling price of a car shipped overseas in April was $16,123, which is $672 more than a year earlier.

Despite the strong Korean currency and a potentially unstable market due to the U.S. Fed’s tapering of stimulus, Korean automakers shipped 299,268 vehicles worldwide, up 14 percent from a year ago.

The ministry data showed that the Korean won rose from 1,064.5 won per dollar at the end of March to 1,030.6 won on April 29, damaging the price competitiveness of Korean-made cars in the global market.

By company, No. 1 automaker Hyundai Motor saw its shipments rise 17.7 percent year-on-year to 113,191 units, thanks to the popularity of compact models like the Avante (called the Elantra overseas) and increasing demand for sport utility vehicles.

GM Korea, the third-largest automaker, was the only exception to the trend as its export volume dropped 3 percent to 47,155 units after its mother company, General Motors, decided to pull its Chevrolet brand from Europe.

The ministry said revenue from Korean auto parts exports reached $2.34 billion, its second-highest figure after last October, when it reached $2.43 billion. The ministry said that Korean automakers’ overseas production has prompted the increase. In this first quarter, local automakers produced 1,088,902 vehicles outside Korea, 70,570 units more than a year earlier.

Despite a jump in exports, industry insiders say they are concerned by the increasing strength of the Korean won, and the difficulties some local automakers face in enhancing their brand image.

Hyundai, the largest automaker, was ordered by the jury of a Montana court yesterday to pay $240 million in punitive damages to the families of two teenagers who were killed in a 2011 crash while driving a 2005 Hyundai Tiburon. They blamed the incident on a defective steering knuckle that they say broke, causing the accident. Hyundai Motor America said it will appeal the verdict.