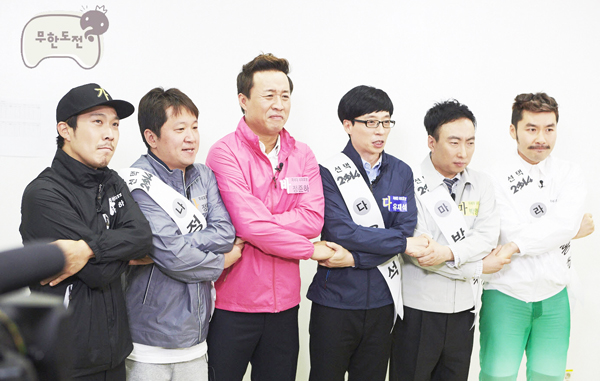 The MBC entertainment show “Infinite Challenge” revealed several polling stations for its “Election Special,” were viewers will get the chance to decide the show’s next leader by casting their ballots in various parts of the country.

The show, which launched in April 2005, has gained a solid support base from viewers throughout the decade for its candid and hilarious episodes.

Led by comedian Yoo Jae-seok, the show has featured leading TV personalities like Park Myung-soo, Jung Joon-ha, Jung Hyung-don, No Hong-chul and Haha. The show tries to get celebrities to deal with various kinds of challenges, including bobsledding, wrestling and auto racing. Its enormous popularity has also lured some international stars, ranging from football player Thierry Henry, tennis player Maria Sharapova, golfer Michelle Wie to figure skater Kim Yu-na, among others.
Local media and the show’s fans are supporting the production team’s innovative approach, since it is unprecedented for a show to hold its own elections.

Viewers can cast their votes on May 22 to select who will lead the show in the coming years.

For those who live in Seoul, the closest polling location is the Dongdaemun Design Plaza in central Seoul or MBC’s headquarters in Yeouido, western Seoul.

The production team also encourages viewers to cast their votes in the June 4 local elections. More information about the election can be found on MBC’s official website.