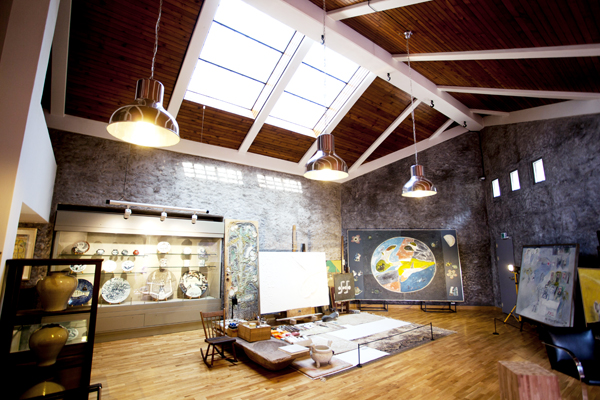 The second floor of the Seokeun Museum is where the late artist Byun Jong-ha worked on his art. By Jeon Ho-sung.

Seongbuk-dong in northern Seoul has ties with hanok that run deep. The district is famous for houses crafted with care, which are often accompanied by perfectly manicured gardens in the traditional style.

It’s hardly surprising that so many ambassadors choose to reside there to get a real taste of Korea.

But for the average Seoulite or tourist, it’s difficult to get inside these estates, which is why Seokeun Museum, the former estate of artist Byun Jong-ha, is a hit with locals.

Reopened late last year (although officially opened in 2001), the museum is showcasing its spring collection from March until June 13.

Famous for his mural at the Sejong Center for the Performing Arts, Byun (1926-2000) first settled at his Seongbuk-dong villa in the early 1980s. This was around the time the district was being developed as a residential estate, and Byun chose a spot located on top of the mountain ridge.

Azaleas blossoming between the rocks of Mount Bukak can still be seen from the property, as can the pine trees that line the mountainside. The gentle murmur of a stream can also be heard.

“My father wanted to leave nature exactly as it was when he built the house,” said Byun Tae-ho, the late artist’s son and a professor of architecture at Sungkyunkwan University.

“He devoted a lot of time to picking out rocks, planting trees and maintaining the garden. Now that’s my lot,” said Byun.

A few steps from the front gate lies the garden. On the left stands a two-story stone house and a rocky cliff, and clear skies are in plain view all the while.

A pond, pink azaleas and fallen leaves from the pine tree all combine to paint a breathtaking scene. Then there is also the sweet scent of plum flowers permeating the estate.

It’s a certified venue - in the 1980s, the Korea Institute of Registered Architects designated the estate as “The House with a Beautiful Garden.”

“Once the azaleas fall, the royal azaleas come and then the cornelian cherries,” said Byun on the blooming cycle that can be seen the residence.

“This is a Japonica tree, and apparently you are not supposed to grow it in your house. They say it’s because it’s so pretty that women become adulterous,” joked Byun.

Flora aside, the museum is home to a bevy of treasures. Antique pagodas, stone lanterns and statues are visible everywhere.

The Seokeun Museum’s garden, left, and its museum, center, is the former residence of artist Byun Jong-ha. His son Byun Tae-ho, right, looks after the property.

“Choi Soon-woo [an art critic] regretted that so many of our artifacts were being taken by Japan, so he said we should hold on to them, and my father started buying them up,” explained Byun about the impressive collection seen inside and outside.

The objects are what remained after Byun Jong-ha donated a bulk of his personal trove, which included the Baekje Dynasty’s (18 B.C.-600 A.D)largest golden crown, to the National Museum of Korea.

Among the remaining artifacts is an eye-catching stone turtle that is symbolic to the estate.

“My father used to call this place “Guseok-dang” (a play on the Korean and Chinese words that mean corner and turtle), explained Byun.

“Firstly, the house is located in the outskirts of Seongbuk-dong, secondly there was this turtle.”

Inside the building designed by architect Kim Won, art leaps from every corner.

The lounge room on the first floor has been turned into a gallery. Byun was known for his expert use of color, and this is evident in the works that line the walls.

“While he was working for the Olympics in ’87 [for the Seoul Games in 1988] he fell ill,” said Byun. “After that, he recovered and held a few exhibitions. He had this renewed zeal and would say he’d show works like never seen before.”

But Byun Jong-ha grew more frail and eventually passed away.

Along the corridor that is decorated with literary magazines and portraits of artists from eras gone by, comes the stairs that lead to the second floor, or what used to be the studio.

It’s six meters above ground and spacious. Sunlight streams in along the wooden triangle beams on the ceiling, and there are hooks for suspending installations. On the floor is a canvas, brushes and paint that Byun used for work.

What’s most striking about the second floor are the rough grey walls. “He wanted it to be like a primitive landscape, similar to a cave,” said Byun. Meanwhile, in the glass shelf next to the canvas, there are various vases and other ceramic works by the artist.

“He especially liked to paint religious motifs on the round discs,” said Byun, pointing to a blue and white disc with a distinctly Christian icon emblazoned on it.

“That’s a replica of the disc the government gave to Pope John Paul II when he visited Korea for the first time,” explained Byun.

On the terrace it feels as if time has stopped and spring is all round. The mountain is in clear view and the only regrettable sight is the green fence that separates the estate and the hillside.

“There are stray animals and even feral pigs out there, so we can’t help it,” said Byun.

Of his late father’s atelier-turned museum, Byun said he was proud.

“In 1996, we established the Seokeun Art Foundation, and in 2001 we opened the gallery,” said Byun. “But due to maintenance problems we closed for a while. In 2010 my mother passed away, and since then we’ve worked hard to renovate the estate.”

Byun said he is now content that the museum is up to the standard of any private art museum in Europe. “We’re working harder to say that you can find a gallery of this caliber in Korea.”