KDB-KoFC to merge by Jan. 1

KDB-KoFC to merge by Jan. 1 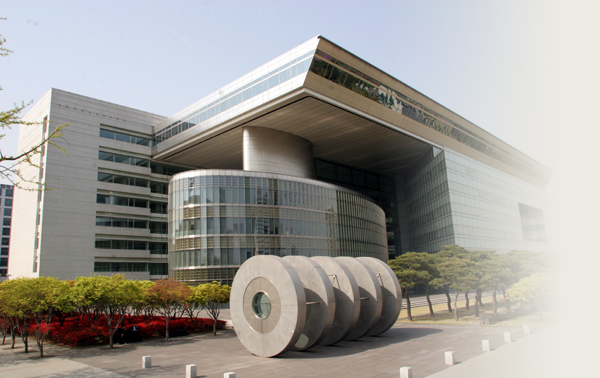 The Financial Services Commission yesterday announced details of its plan to reset the roles of public institutions that provide funds for government policies to maximize effectiveness.

The commission said Korea Development Bank and Korea Finance Corporation will merge and relaunch on Jan. 1. It also unveiled a detailed plan to establish a new 100-person institution in Busan in December to fund marine businesses and a task force to prepare financial policies for unification of the Korean peninsula.

The National Assembly passed the Korea Development Bank legislation bill on May 2, which ended the Lee administration’s plan to privatize the bank.

The former Lee Myung-bak administration wanted to make KDB a specialized investment like like JPMorgan, Morgan Stanley or Merrill Lynch, but President Park Geun-hye withdrew the plan in August in favor of the merger.

In January, the Ministry of Strategy and Finance announced that KDB, its holding company and the Industrial Bank of Korea had been recategorized as public institutions two years after they were removed from the list.

The Lee government separated KoFC from KDB in 2009 to reduce the bank’s policy-financing business involving government support for certain areas of business and industry. The Park administration said the work of the KDB overlapped with the KoFC.

“Integration of KDB and KoFC will be made in a way that minimizes conflicts between employees of the two institutions and in a manner that does not affect the original functions of the two,” said an FSC official at a briefing at the commission yesterday.

The merger will enhance both institutions’ roles in funding start-ups, corporate restructuring and overseas projects, the official said.

The FSC this month will form a seven-member committee to carry out the merger and working-level teams at each institution.

KoFC’s overseas finance business will be handed over to the Export-Import Bank of Korea. 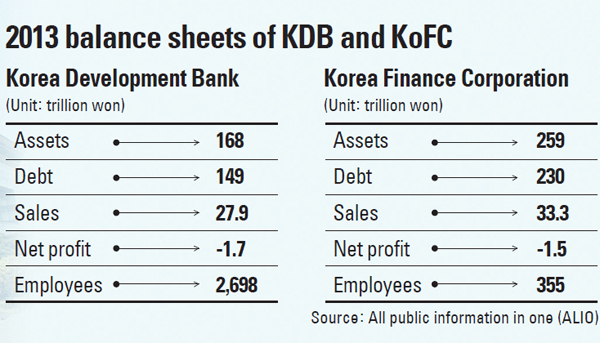 A merger contract will be written and signed in August.

In order to increase the government’s financial support for the shipping and offshore plant industries, the FSC also announced its plan to establish agency in Busan in December.

It is part of the president’s campaign pledges to strengthen the nation’s competitiveness in the global offshore facility market.

The shipping finance functions of the Export-Import Bank of Korea, Korea Trade Insurance Corporation and KDB will be relocated to the Busan International Finance Center in September. The new organization will be called the Center for Ocean Finance.

The KDB and Export-Import Bank alsop will start creating a 550 billion won fund over the next five years to help finance the ocean industry.

For unification, the FSC, Ministry of Strategy and Finance, Bank of Korea, Financial Supervisory Service, Korea Deposit Insurance Corporation and private experts will gather this month to begin discussions on the costs of measures to integrate financial systems of the two Koreas in the future.

Along with the KoFC’s recently established Unification Finance team, KDB will form a research arm on North Korea and North East Asia.

Hong Ky-tack, chairman of KDB Financial Group, said at the group’s 60th anniversary ceremony in April, “We need to start making preparations for an era of ‘Unification Bonanza’ by studying the North Korean economy and Germany’s case, and setting strategies.”