Federer left in the dust after disappointing play

Federer left in the dust after disappointing play 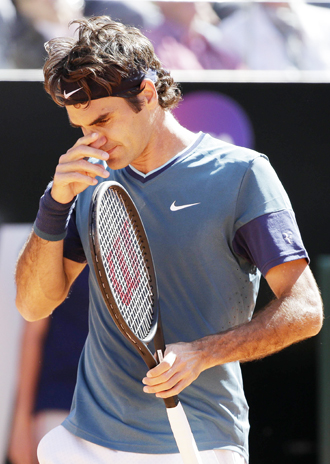 Roger Federer will be returning to his newborn twins earlier than expected after his Italian Open adventure ended with a 1-6, 6-3, 7-6(6) second round defeat by Frenchman Jeremy Chardy on Wednesday.

Federer had been hoping to get his clay-court form back in gear after skipping last week’s Madrid Open to attend the birth of his twin boys Leo and Lenny, but the winner of a record 17 grand slam titles will now be flying back home to his family after his early loss in Rome.

Fourth seed Federer made a promising start but, with dust whipping up off the surface and the ball playing tricks, Chardy fought back with some brutal forehand winners and saved match point in the tiebreak before sealing victory.

While Federer’s French Open preparations came to an early end, Andy Murray made light of the swirling winds to ease past Spain’s Marcel Granollers 6-2, 7-5.

The seventh-seeded Briton proved far too solid for his unseeded rival as he set up a third-round clash with Austrian veteran Jurgen Melzer.

Murray reeled off four games in a row from 2-2 in the opening set and, apart from losing his opening service game in the second set, he always looked in control.

While not being forced to play his best tennis, it was an impressive opening for Murray, who a year ago at the same tournament retired with a back injury against the same opponent.

“All the dust and stuff was getting in your eyes. It was extremely blustery, strong conditions,” Murray, who is looking to get in some match-time for the French Open, told Sky Sports.

“From one of the ends it was really tough to get any real depth on the ball. I just tried to play a smart match.”

Following Murray, Roger Federer was back in action for the first time since the birth of his second set of twins forced him to withdraw from the Madrid Masters.

Women’s top seed Serena Williams was scheduled to take on Germany’s Andrea Petkovic, while men’s top seed Rafa Nadal was topping the evening bill at the Foro Italico with a second round clash against France’s Gilles Simon.