Heat get hot down stretch for sixth trip to East finals

Heat get hot down stretch for sixth trip to East finals 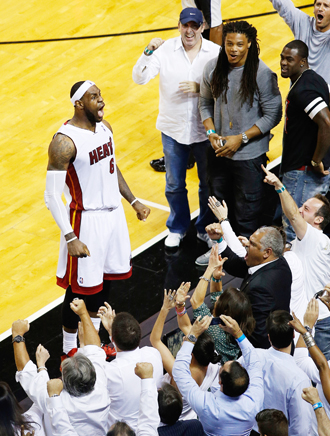 LeBron James reacts after the Heat eliminated the Brooklyn Nets, 4-1, in the second round of the NBA playoffs at American Airlines Arena in Florida. Miami will face either Indiana or Washington in the conference finals. [USA TODAY/NEWS1]

LeBron James leaped onto a courtside table as the postgame celebration was starting, thumped his chest and punched the air.

Sure looks easy, though. It was the 10th straight series win for the two-time defending NBA champions.

“When we met the first day for prep we said the No. 1 key, overwhelmingly the No. 1 key in this series, was great mental stability,” said Heat Coach Erik Spoelstra.

“That’s what it was down the stretch ... incredible focus.”

Incredible defense, too, when it was needed most.

Down by eight with less than five minutes left, the Heat forced Brooklyn into nine straight missed shots while peeling off a 12-0 run to take the lead. Allen’s 3-pointer off an assist by Mario Chalmers with 32 seconds remaining was the go-ahead moment, and the Heat wouldn’t trail again.

Allen disrupted Joe Johnson’s dribble on the game’s final play, James then swatted the bouncing ball out of everyone’s reach, time expired - and the Heat advanced.

Chris Bosh scored 16 and Allen finished with 13 for Miami. Johnson had 34 points, Paul Pierce scored 19 and Deron Williams had 17 for the Nets.

It’s the sixth trip to the East title series in the last 10 seasons for Miami, which is bidding for a fourth straight trip to the NBA Finals - something only the Lakers and Celtics franchises have accomplished.

James is heading to the East finals for the sixth time in eight seasons, the first two of those trips coming with Cleveland in 2007 and 2009.

The Heat will next face either fifth-seeded Washington or top-seeded Indiana. The Pacers lead that series 3-2.

“Obviously, we thought this was a game we should have won,” Johnson said.

“He has a way, right? He’s a playoff warrior,” Spoelstra said.

Eventually, barely, Miami broke through. But it took most of the second half to get there.