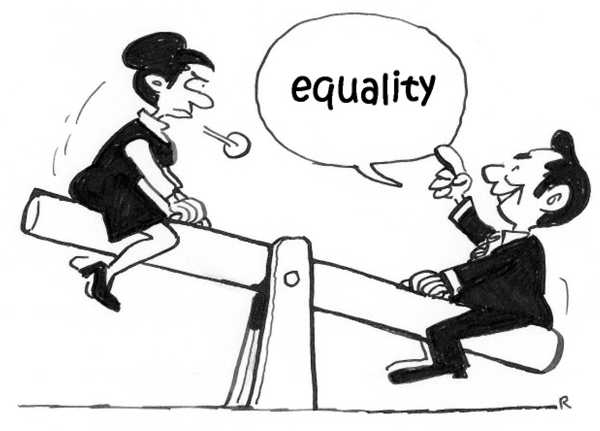 Reinventing the rights and status of women and using their abilities for social and economic development is a global trend. The idea spread when ABC News correspondent Claire Shipman and BBC World News America’s Katty Kay co-authored “Womenomics,” in 2009.

But recently, Japanese Prime Minister, a politician known for his rightist inclinations, set “womenomics” as the new policy for his “Abenomics” concept when he toured five EU nations. The proposal is quite absurd, as Abe has always claimed that banning gender discrimination would destroy Japanese families and society. He also renounces the idea of gender equality, advocating “men as a supplier, women as mother and wife.”

Just like Korean women, Japanese women often give up their careers for their families. Sixty percent of working women quit their jobs after marriage or the birth of their first child. Half of these women are college graduates. By the time they are in their late 40s, they return to work, mostly as part-timers or temps. Japanese supermarkets have the most highly educated cashiers.

By 2020, Abe wants to increase the ratio of female CEOs to 30 percent. But only 1 percent of current Japanese CEOs are women, far lower than America’s 16 percent and France’s 28 percent. Abe also said that maternity and child care leave would be extended from one and a half years to three years and that he would reduce the waiting period for day care and kindergartens. He will seek legislation requiring companies to appoint female CEOs.

Womenomics aims to fully utilize the talents of females for social and economic development with the premise of complete gender equality. Abe’s policy lacks sincerity as it does not reflect his philosophy. It is suspected that the policy is mere rhetoric to improve Japan’s image.

Japan attempted to deny the history of so-called comfort women, or sexual slaves recruited forcibly during World War II, altogether, but backed off when the United States put pressure on it. Abe treasures the traditional value of looking at women as mothers and wives rather than as individual characters. He has said, “the most natural and basic unit of society is not an individual but a family.”

Japan is the oldest society in the world, and the birth rate of women of childbearing age is not higher than 1.3 to 1.4. The Japanese economic authorities claimed that if the 3.6 million homemakers or stay-at-home women between age 26 and 49 resume economic activities, about 6 trillion yen in production would be added. Does Abe aspire to turn the female work force into a social engine? Or does he look at women as a “tool” to make up the diminishing work force?

Korea is not much different. But at least Koreans elected a female president, which is unprecedented even in the United States.

The author is a chair professor at Duksung Women’s University.