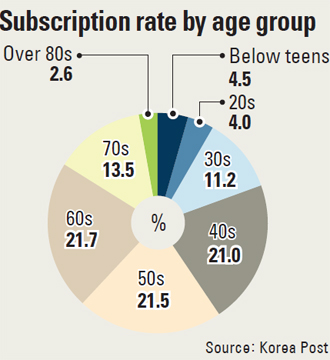 Korea Post, the national postal service under the Ministry of Science, ICT and Future Planning, said yesterday it has sold more than 100,000 thrifty phones, or altteul phones, in the seven months since it began sales.

The postal service started selling thrifty phones from six small telecom operators in September at about 230 of its offices nationwide. The ministry’s goal was to offer people a cheaper alternative to the top three mobile carriers and encourage small and midsize thrifty phone businesses.

According to the Korea Post, an average of 729 people per day subscribed to a thrifty phone service since January. This is an increase of about 22 percent over the 597 phones sold per day by the Korea Post last year from September through December.

Because thrifty phones use the same network as major mobile operators, the quality of calls is the same, but the cost is about 50 percent cheaper.

More than half of thrifty phone customers are in their 50s or older.

Customers in their 60s make up 21.7 percent of the total subscribers, and those in their 50s account for 21.4 percent, Korea Post said. But younger mobile phone users are beginning to favor the cheaper services and many are shifting providers.

According to the Joongang Ilbo, thrifty phone companies are rising to compete with the top three mobile carriers’ LTE smartphone services. Users can use the LTE network on their thrifty phone at a 50 percent discount using a USIM card. For 2G and 3G thrifty phone services, users will pay 30 to 40 percent less on their monthly phone bill.

The government wants to help thrifty phone companies by making it cheaper for them to rent network space from major mobile operators. The Ministry of Science, ICT and Future Planning will push to reduce the cost in a meeting this year.