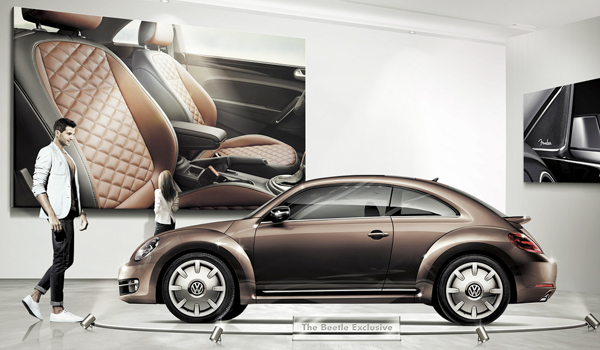 The company has applied delicate details to the inside and outside of the car. The model comes in three colors: toffee brown, candy white and deep black. The 18-inch alloy wheels highlight the unique design of the original Beetle.

The differences between the original Beetle and the exclusive version are more evident inside the car. The exclusive logo is featured on the car’s door sills. The car can come furnished with leather black and brown seats decorated with diamond stitching. While the original model had only one color for ambient lighting, drivers can now choose among white, blue and red ambient lights depending on their mood.

The sound system inside the car is the result of Volkswagen‘s cooperation with Fender, an internationally recognized guitar maker. The 10-channel digital amplifier with 400-watt output gives the driver a more vivid music experience while driving. The car has nine speakers, including a subwoofer.

“The Beetle Exclusive is made from the iconic culture code of Beetle combined with the craftsmanship of German Meister,” said Thomas Kuehl, CEO of Volkswagen Korea. “The owners of the 100 Beetle Exclusives will feel special with the extraordinary drive.”