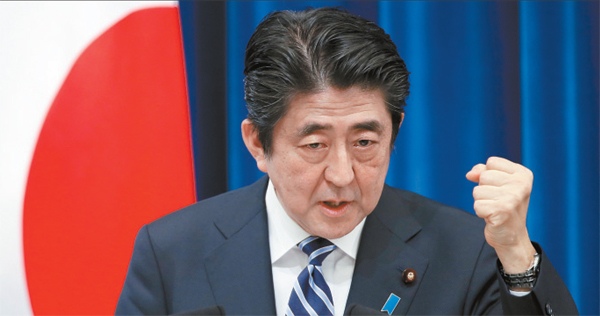 Prime Minister Shinzo Abe described yesterday how his government will lift a ban on Japan exercising its right to collective self-defense through a reinterpretation of its postwar pacifist Constitution.

At a press conference yesterday evening, Abe called officially for a constitutional reinterpretation to enable Japan to regain its right to exercise collective self-defense, or the ability to deploy troops to help allies even in cases in which Japanese territory is not threatened.

“If there is a sudden dispute abroad and there are Japanese who want to flee,” he said, Japan will be able to send troops to emergency situation to escort U.S. military aircraft or ships to evacuate Japanese civilians.

“In such a case, unless Japan is directly attacked,” he said, “we will not be able to employ our self-defense forces to assist U.S. vessels under our current constitutional interpretation.”

This could mean Japan may also send troops to the Korean Peninsula in an emergency situation in the guise of assisting the United States or other security threats.

Korea is keeping a particularly close watch on Abe’s defense plans because Japan has used the security situation on the Korean Peninsula as an example of how it may need to exercise its right to collective self-defense.

Seoul is adamant that Japanese forces cannot come to the Korean Peninsula without explicit consent from the South Korean government.

The Korean Ministry of Foreign Affairs yesterday responded to Abe’s announcement, saying Japan needs to “work at erasing suspicions and concerns from neighboring countries regarding its history when it deals with defense and security issues.”

A government-appointed advisory panel of security experts submitted a report yesterday morning to Abe that called for a flexible interpretation of the Constitution’s Article 9, arguing the clause does preclude Japan’s right to collective self-defense - a drastic departure from the official view of past governments.

Article 9 of Japan’s postwar Constitution stipulates, “The Japanese people forever renounce war as a sovereign right of the nation and the threat or use of force as means of settling international disputes ...” and that the “right of belligerency of the state will not be recognized.” The Japanese government emphasized in 1981 that while as a sovereign state Japan inherently possesses the right of collective self-defense under international law, “the exercise of the right of self-defense as allowed under Article 9 of the constitution is limited to what is minimum and necessary to defend the country,” and thus exercising the right of collective self-defense is not permitted under the Constitution.

Japan currently maintains its Self-Defense Forces for defense purposes. The hawkish Abe has pushed for a strengthening of the Japanese military to expand its role in international security. During his first term as prime minister in 2006 and 2007, Abe initially advocated a constitutional amendment, a complicated and delicate process, to enable Japan to regain the right to collective self-defense, without much success.

The panel’s report said the current regional security environment - namely threats from North Korea and China, which has been boosting military spending - is a reason why Japan’s ban on collective self-defense is inadequate.

The report recommended that Japan be able to exercise the right of collective self-defense, which will enable the island nation to assist the United States in times when its naval ships come under attack while in or near Japanese waters. It also said it can shoot down a missile heading to the United States and play a greater role in UN peacekeeping operations.