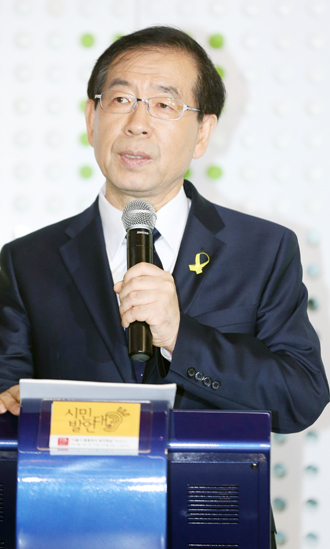 Governors and mayors nationwide registered with the National Election Commission yesterday to run in the June 4 local elections, which effectively suspends their office duties and marks the countdown to the official campaign season.

Candidacy registration is expected to turn up the heat between the ruling Saenuri Party and the New Politics Alliance for Democracy (NPAD), in sharp contrast to the past month when lawmakers and aspiring politicians refrained from publicly smearing one another in the aftermath of the Sewol ferry disaster.

The official campaign period starts on Thursday and runs until June 3.

Incumbent Seoul Mayor Park Won-soon of the opposition NPAD officially declared his bid for re-election yesterday at Seoul City Hall before registering, saying he will pursue policies worthy of trust that value the safety and lives of the public.

“What is important is not the progress of development, but the way it is headed,” the former human rights lawyer said, in a clear reference to his contender Chung Mong-joon’s promise to realize sizeable construction investments in the city. “Realizing the happiness of the people is just as important as achieving that kind of development.”

Saenuri candidate Nam Kyung-pil and his NPAD opponent Kim Jin-pyo, who will face off in the Gyeonggi gubernatorial race, also registered at the National Election Commission (NEC) headquarters yesterday in preparation for an all-or-nothing competition.

As required by election law, both gave up their National Assembly seats to run in the election.

“To run in the Gyeonggi gubernatorial election, I bring an end to 17 years of service as a lawmaker today,” Nam said yesterday at the National Assembly. He also promised voters he would not engage in negative campaigning against his rival.

Registration for the June polls will continue today, the last day of the official two-day period. To register, candidates are required to submit certain documents, including proof of their financial and real estate assets and academic credentials. They are also obliged to provide tax records and a military service certificate.

This year, the NEC also required would-be candidates to submit records of their previous election campaigns, a requirement the election watchdog added for the local elections.

The idea is to provide voters a glimpse into the candidates’ political principles. In Korea’s highly polarized political sphere, several politicians have crossed party lines for the sole purpose of winning votes, regardless of political philosophy.

Another big change to the local elections this year is the introduction of early voting, which will be held May 30 and 31.

Anyone who wishes to cast an advance ballot is not required to fill out any extraneous paperwork. The opposition hopes the new installment will raise voter turnout.

Analysts have speculated that the opposition will benefit from a higher voter turnout, as it means more people in their 20s and 30s, who tend to be liberal, come to the polls.

With less than 20 days until the local elections, widely considered to be a litmus test for the Park Geun-hye administration, the tide appears to have turned in the opposition’s favor amid public disappointment with the ruling party and the government over the poor handling of the Sewol disaster.

In an effort to keep that momentum going, the NPAD is poised to frame the election as an opportunity to punish the government and the Saenuri for their failure to effectively deal with the crisis, especially the fact that no passengers aboard the ship were saved after the first day of the accident.

Recent approval polls illustrate rising fears within the Saenuri, as it can realistically face defeat in a number of important races. Its biggest concern, most notably, is whether Chung Mong-joon, a former presidential hopeful who has staked his 27-year political career on this race, can wrest control of Seoul from Mayor Park.

In the latest survey of 800 adults in Seoul, conducted Monday to Tuesday, Park led with 47.4 percent compared to Chung’s 37.7 percent - widening the gap between them by 3.3 percent from the same survey conducted a week earlier.

The poll, conducted by JTBC and Gallup Korea, has a margin of error of plus or minus 3.5 percentage points.

“The ruling and opposition are now treating the issue of safety as an important electoral frame. The fact that the two parties are both calling for improving safety standards tells us that our society is not safe,” said Representative Choi Jae-cheon, who leads NPAD’s election strategy team. “And at the bottom of the safety issue lies the Sewol sinking. As a result, voter turnout will increase among those determined to make the country a safer place to live.”