4 of Sewol’s crew charged with type of homicide

4 of Sewol’s crew charged with type of homicide 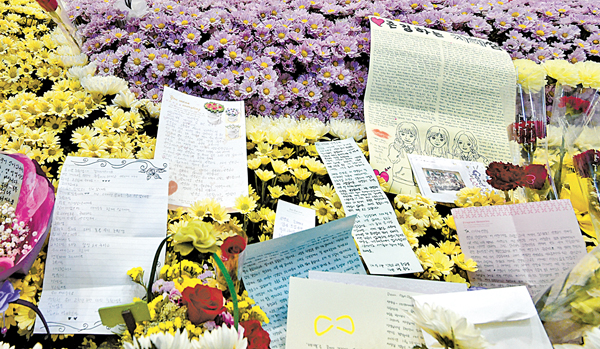 Letters and flowers are placed on a memorial altar in Ansan, Gyeonggi, for the teachers who died in the Sewol sinking to commemorate Teachers’ Day yesterday. [NEWSIS]

The captain and three senior crew members of the sunken Sewol ferry, who are accused of abandoning ship while ordering entrapped passengers to stay put, were indicted yesterday on charges of homicide.

The decision came nearly a month after the 6,825-ton ferry carrying 476 passengers capsized and sank off the southwestern coast. One of the country’s worst maritime disasters has left 284 dead and 20 still unaccounted for, filling the entire nation as well as relatives of the victims with despair and anger.

The four crew were among the first to be rescued on the day of the accident by the Coast Guard.

The exact charge prosecutors brought against Lee Jun-seok, the 69-year-old captain, and the three other crew members is manslaughter by omission. One can be liable for this crime when the fault lies in a failure to foresee and allow otherwise avoidable dangers to occur by a defendant responsible for preventing such dangers.

If convicted, the four can be sentenced to life in prison.

Prosecutors will have to prove that the four could afford to save passengers but deliberately abandoned their responsibilities at the time of the accident.

Cpt. Lee has said under questioning that the order to the passengers to stay below deck was only intended to keep them safe. However, some of the crew allegedly admitted that they put their own safety before that of the passengers, according to prosecutors.

“We charged the four with homicide because they had the full authority and responsibility to save passengers,” said Ahn Sang-don, a deputy chief prosecutor of the Gwangju District Prosecutors’ Office. “If they had the willingness to do so, they could have prevented the slew of deaths and saved many victims,” he continued, “but they escaped the ferry and resulted in grave consequences.”

Lee and the three indicted crew members - a first mate, second mate and a chief engineer - are also charged with negligence of duty and violation of maritime law.

Of a total crew of 29, nine died in the accident and 20 survived. Another 11 crew were indicted for committing blunders and safety breaches that contributed to the ferry disaster. They included Park Han-kyul, a 25-year-old female third mate who was actually steering the doomed ferry at the time of the accident. 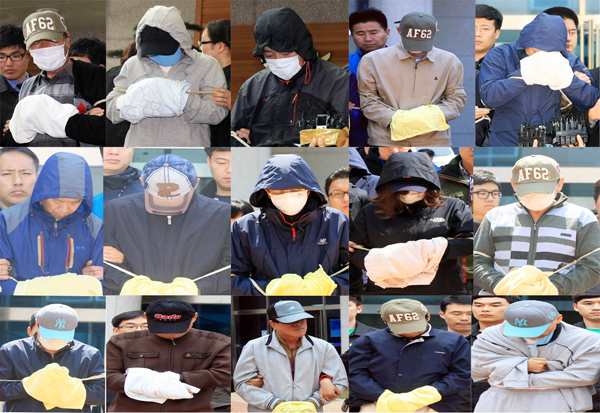 Of 29 crew members on the Sewol, 20 were rescued while nine perished. Four crew members were charged yesterday with a type of homicide while eleven others were charged with negligence of duty and breach of maritime law. The four include the captain (far left in the first row), a first mate (second from right in first row), a second mate (far left in second row) and a chief engineer (second from left in second row). A 25-year-old third mate, second from left in first row, who actually steered the ferry, was also indicted. [NEWS1]

When asked why Park was not charged with homicide, the deputy chief prosecutor said, “She didn’t have the authority to give any orders. ”

Ahn also confirmed that several factors, including the overloading of the ferry and inexperienced steering, contributed to the calamity.

The prosecutor said that the overloading and renovations to accommodate more passengers compromised the ship’s ability to maintain stability.

Earlier this month, a joint team of police and prosecutors revealed that the Sewol carried cargo three times the maximum weight limit while carrying less ballast water than required. The water is used to maintain the stability of large ships.

A series of revelations suggesting unlawful business practices prompted investigators to closely look into the Chonghaejin Marine Company, the operator of the Sewol.

Authorities found that the owner family, including patriarch Yoo Byung-eun, had allegedly committed various financial irregularities such as tax evasion, embezzlement and illicit foreign trading. They are seeking to find a connection between the irregularities and the disaster.

Yoo was the founder of the predecessor company to the shipping operator while two of his sons are major shareholders in the holding company of the operator.

While prosecutors managed to summon Yoo’s close aides for questioning, they have failed to question any members of the Yoo family.

The two sons - Yoo Hyeok-gi and Yoo Dae-gyun - ignored requests to come in for questioning.

The second oldest son, Hyeok-gi, currently lives in the United States and the police are in the process of seeking help from U.S. agencies including the FBI. The prosecution said that it put the older son, Dae-gyun, on a nationwide wanted list, classifying him as a “Class-A” suspect. With that status, he can be arrested on the spot if found by police.

Investigators assume that Dae-gyun is taking refuge in a religious facility in Anseong, Gyeonggi, which is dedicated to serving members of a pseudo-Christian cult led by the elder Yoo.

However, adherents to the sect are blocking investigators from entering.

The adherents yesterday issued a statement accusing the police of “suppressing the freedom of religion.”

They blamed the deaths in the ferry capsizing on the Korea Coast Guard rather than the ship’s operator.

Also evading the investigation from abroad are two close aides of the elder Yoo: Kim Hye-Kyung, the head of a pharmaceutical affiliate, and Kim Pil-bae, the president of a publishing company.

The Korean office of U.S. Homeland Security Investigations yesterday requested its headquarters to revoke the two men’s rights to stay in the United States.