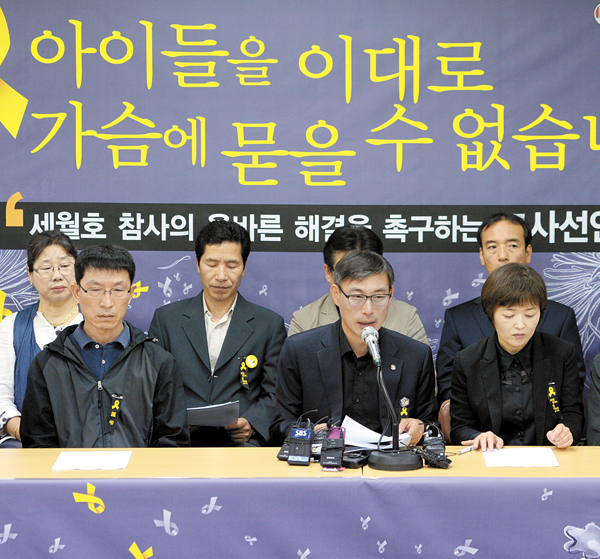 Kim Jung-hoon, center, the head of the Korean Teachers and Education Workers Union, reads a declaration yesterday at the union’s headquarters in Seodaemun District, central Seoul, that demands the government take proper measures in investigating the Sewol ferry accident. [NEWS1]

The Korean Teachers and Education Workers Union (KTU) held a press conference yesterday at its headquarters in Seodaemun District, central Seoul, and released a declaration signed by more than 15,000 teachers nationwide that demanded the government thoroughly investigate the Sewol ferry disaster and punish those responsible.

“President Park Geun-hye must confess to neglecting her duties and take responsibility,” Kim Jung-hoon, the head of KTU, said in the declaration.

“The ferry did not sink accidentally, and this neo-liberal national system that threatens the lives of the people cannot continue. The president must recover public trust through an investigation. Otherwise she is disqualified as the president, and a president who cannot protect the people does not have a reason to exist.”

He went on to blame Park for the government’s poor handling of the disaster and its failure to save more passengers.

“The president did not do anything but intimidated government officials, and her perfunctory apologies and staged consolation has let down the public,” he said.

At the conference, the union chief also apologized to the students who perished in the ferry accident.

The 6,825-ton Sewol capsized on April 16 in waters off Korea’s southwestern coast, leaving more than 300 passengers dead or missing.

Most of them were 11th-grade students from Danwon High School who were on their way to Jeju Island for a class field trip.

The declaration was signed by more than 15,000 teachers nationwide starting May 9. The list of the participants was disclosed, according to the union’s spokesperson, Ha Byeong-su, who added that KTU’s members as well as other teachers also agreed with the declaration.

When asked whether the union was demanding Park’s resignation, Kim answered, “Nothing changes, even if the president resigns. But she does not deserve to represent the Korean people if she cannot take responsibility.”

The union also denounced the Blue House for reviewing punishments for 43 teachers who posted on the Blue House’s webpage on Tuesday demanding the president step down. KTU said it will take legal action to protect them. “The public will be outraged if [the Blue House] punishes these teachers for such a fair demand,” Ha said.