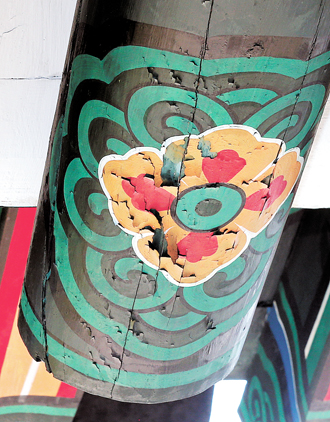 The multicolored paintwork done during the Sungnyemun restoration is flawed, a new report states. By Byun Sun-goo

The newly rebuilt Sungnyemun Gate, also known as Namdaemun, should be partly demolished and fixed again due to shoddy and flawed restoration work, state auditors said yesterday in a report.

The No. 1 National Treasury, which was destroyed in an arson attack by a disgruntled homeless man in 2008 and rebuilt in June 2013, was made using cheap materials and low-quality chemical glues with unauthorized painting methods, an official from the Board of Audit and Inspection (BAI) said yesterday at a briefing.

The BAI said that, in particular, the traditional Korean decorative patterns, or dancheong, on the gate need an overhaul.

A senior dancheong designer who led the paintwork had no experience in making them in the traditional way and apparently ordered workers to use an unapproved method, it said.

The shoddy paintwork made the colorful patterns appear blurry, which the designer tried to conceal by finishing the work using chemical glues, which caused the paint to crack on the wooden surface.

By using cheap chemical materials, the senior designer, Hong Chang-won, embezzled about 300 million won ($292,768) of state funds for the restoration, the BAI said.

The dancheong patterns are regarded as one of the most significant aspects of traditional Korean architecture and can be seen on temples and royal palaces.

The BAI determined that the state-run Cultural Heritage Administration, in charge of the gate restoration, signed contracts with two private builders in December 2009 and pushed them to complete the work within five years, which resulted in faulty repairs.

The gate’s restored roof tiles were not traditional and different in size from the originals, according to the BAI. It added that when the builders complained that it was difficult for them to craft traditional tiles, the administration allowed them to make the tiles under the modern standard.

The gate was apparently also placed on ground about 145 centimeters (57 inches) higher than the original.

The BAI said it has called for heavy punitive measures for the senior designers as well as four other officials. The auditors asked the police in March to investigate Hong.

The auditors also indicated that the Dongnimmun (Independence) Gate in western Seoul had been built by an unqualified contractor and that the Seodaemun District Office should take responsibility.