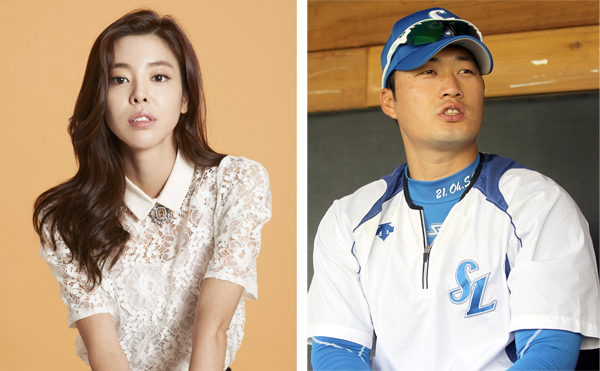 Rumors surfaced early yesterday that Korean actress Kim Kyu-ri of “Portrait of a Beauty” (2008) is in a romantic relationship with baseball player Oh Seung-hwan.

Both sides denied the rumor as soon as the news broke.

Yesterday morning, one news outlet reported, “Kim has been dating Oh for three months now. In order to meet with Oh, who is playing in Japan, Kim has gone to Japan several times.”

But later that day, Kim’s agency Core Contents Media said in a press release, “Kim is very disconcerted about the news. She has been filming for Im Kwon-taek’s ‘Revivre’ and drama ‘Cunning Single Lady’ since January. She hasn’t had time to meet someone.”

Oh’s agency Sports Intelligence also rebuked the rumor, saying that it is their first time hearing of such news and pleaded with the media “not to bother Oh, who is performing very well these days.”

Oh, 31, debuted in 2005 as a member of the Samsung Lions and joined Japan’s Hanshin Tigers last year.