The grass is always taller in South Jeolla

The grass is always taller in South Jeolla

Bamboo forests like this one in Damyang, South Jeolla, contain shoots that grow up to 20 meters (65.6 feet) in height during their lifetime. By Ahn Sung-sik

What’s the fastest-growing plant in the world? The answer is, of course, bamboo.

The plant is part of the grass family, but because it grows so tall, often up to a height of 20 meters (65.6 feet) in just a month, it is sometimes mistaken for a type of tree.

To witness how fast bamboo grows, pack your bags and head down to Damyang County, South Jeolla.

Although bamboo can be spotted in other Korean towns, Damyang is particularly well known for having large volumes of the plant. The city is even set to host Korea’s first World Bamboo Fair next year to help industries that manufacture bamboo products.

The city also holds the Damyang Bamboo Festival each year. The 16th annual event starts on June 27 for four days.

I started calling experts in mid-April to discover when the young sprouts would start shooting out of the ground. I set off for Gyeongbu Highway almost immediately after hearing from one bamboo expert in Damyang that some of the plants had already grown more than one meter due to the prematurely hot weather.

It took about three and a half hours to reach the bamboo forests from central Seoul.

“Bamboo shoots grow rapidly 20 days after the bud first comes out of the ground,” said bamboo researcher Lee Song-jin. “Back in 2012, there was one bamboo shoot that grew 125 centimeters [49.2 inches] overnight.”

Bamboo that grows fully within a month lives for around 50 years. And right before the plant’s death, its flower comes into bloom. It is the bamboo’s last struggle to grow before it has taken all the nutrition from the soil.

My first stop was Juknokwon, the most well-known bamboo forest in the city. I was lucky enough to spot many of the newly growing buds while I was there. I lay on the ground to take a closer look at a bamboo shoot that was a little taller than my finger.

The color of its exterior was not yellow like the versions people often see on their dining table. The cone-shaped shoots were dark brown and covered in downy hair, and to me, they almost looked like a small animal. 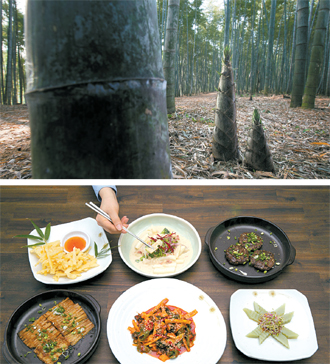 Cone-shaped bamboo shoots, top, are soft inside, so they are often used as an ingredient in recipes.

I moved on to Samdari Bamboo Forest, which is known to have fewer visitors than Juknokwon. As soon as I felt the forest’s cool air, I spotted the dark shoots in between the tall, green bamboo stems.

Although the plants grow taller, their girths stay the same. The bamboo’s diameter when it comes out of the ground remains consistent until the plant is fully grown. The stems develop their ridges upon birth, and the length of each stem in between the ridges grows to make the plant taller.

I returned to the forest the next day to see if I could see any sprigs that had grown up to one meter overnight. I couldn’t tell, but I had no regrets visiting as I got to witness the bamboo shoots covered in morning dew. To me, it looked like the young plants were absorbing moisture as quickly as possible to grow faster, and the morning dew seemed like the plant’s sweat.

I wasn’t the only one longing to see the birth of the bamboo. From May 3 to 6, the weekend around Children’s Day, some 80,000 people visited the forest. Last year, it welcomed a total of 1.2 million visitors.

The forest’s eight different trails are well organized, but this convenience attracts too many people. To check out bamboo in a quieter place, I suggest Daenamugol Theme Park, which became less popular after Juknokwon opened in 2003.

The park doesn’t have a website and there is no brochure, not even at the ticketing site. There is also a lack of signs directing you inside the park.

But the park has its own charm as it feels wilder than the well-organized Juknokwon. It is the perfect place for visitors who want to relax, hear the birds sing and enjoy the sounds of the bamboo blades trembling against one another.

Out of Damyang’s 354 towns, 350 have their own bamboo forests. Among them, the forests in Haengseong-li in Daejeong-myeon and Samda-li in Damyang-eub are especially interesting for slow walkers, as the paths have developed naturally.

For a more historic forest, Soswewon is the place to visit. The private garden was created by aristocrat Yang San-bo (1503-1557) in the Joseon Dynasty (1392-1910). After his teacher Jo Gwang-jo (1482-1519) was pushed out of the Joseon capital because of a political conflict, Yang returned south after he passed the state exam to become a civil servant. He began cultivating a garden in the very place where he spent his youth.

The garden, near the entrance, shows a trail flanked by bamboo stems. The path leads visitors to some willow trees and a stream running down into a valley. Although the forest seems unorganized, a mysterious harmony exists, allowing visitors to enjoy a different view from every angle.

As there are so many bamboo woodlands, local residents in Damyang are proud of the abundant plants. Many famous Joseon-era scholars, including Lee Hwang (1501-1570), traveled to the city to talk about their studies. Writer Jeong Cheol (1536-1593) even penned “Seongsan Byeolgok,” which praises the superb landscape that changes with every season.

Bamboo used to be the source of local residents’ craftsmanship. Locals used the plant to make baskets, hair combs and other items for a living.

Even during the Japanese colonial period (1910-45), a railroad was built through the city so that bamboo products could be delivered easily to other regions.

Although Damyang struggled after the 1980s because of the massive supply of plastic crafts and bamboo products made in China, it has become busier in the past decade because of visitors who wish to relax in the bamboo forests.

Several people I met on my trip to Damyang told me stories about the bamboos. One of the most memorable was from a man who manages a bamboo forest.

He boasted about the strength of the plant: “Because the roots are so strongly and meticulously intertwined, they won’t even be harmed if a bomb goes off.

“During the [1950-53] Korean War, it was said that people who dug a den underneath bamboo roots stayed alive,” he said.

Bamboo is known for its hundreds of roots that entangle underground to keep the plant’s stems upright even in strong gusts of wind.

But some self-centered individuals are a threat to the existence of Damyang’s forests. Poachers come down to the city to take away small, soft bamboo shoots, a popular ingredient to cook with.

Almost all of the bamboo shoots at Juknokwon were covered in a white powder. At first I thought the bamboo secreted it to protect itself from insects and other blights, but an official from Damyang County Office said that it is necessary to put flour around the small shoots so that people won’t take them away from the ground.

Many signs with “CCTV Recording” or “There is a 100 million won fine if you are caught taking away bamboo shoots” written on them are located across the forests in Damyang; almost as many as the bamboo shoots themselves.