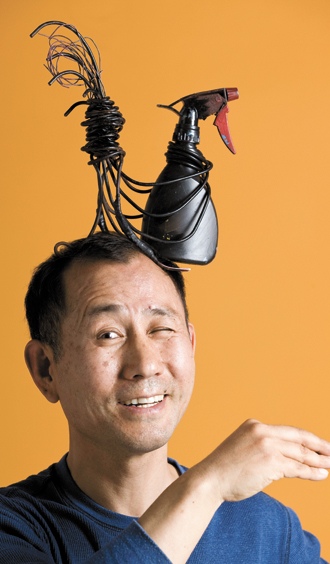 Song In-hyun, the director of Mindeulle Theatre Company, imitates a chicken with one of the props used in his play “Black Chicken.” By Kwon Hyuk-jae

In Korea, May 5 marks Children’s Day, an annual holiday meant to celebrate children and their well-being. But for Song In-hyun, the director of the Mindeulle Theater Company, which produces children’s plays, every day should have that same enthusiasm and focus.

Song established his theatre group in 1996 and has been performing traditional Korean works and children’s plays since then, working as a director, stage manager and even as an actor.

He is a graduate of the Seoul Institute of the Arts. While in college, he won the grand prize in a national university festival competition that was hosted by the Joongang Ilbo and TBC, and received honors from the National Theater Association.

After school, Song worked in Daehakro and previously served as a chief director of Korea’s Theater Association for Children and Young People from 2006 to 2009.

He is also an advocate of traditional Korean dance, particularly Bongsantalchum, (Intangible Cultural Asset No. 17), which he learned while in college, hoping it might one day help his career. But now Song is sure it has become his best asset. For him, any place can become a stage, and he primarily puts on productions that encourage audience participation.

The theater director’s most recent play, “Money Goblin,” performed April 26 in the Kkumdure Library in Osan, Gyeonggi, in the run-up to Children’s Day, was indicative of this belief.

The goblin characters performed a traditional Bongsan mask dance to an upbeat tune played on traditional instruments. A few of the 3- and 4-year-olds in the audience even went up on stage to interact with the performers.

But despite the show’s success, this year’s holiday was noticeably less cheerful, with the Sewol ferry tragedy casting a somber shadow over the festivities. Most of the victims onboard the ship were 11th-grade high school students on a class trip to Jeju Island.

For child advocates like Song, the loss of so many young lives was unfathomable.

The renowned theater director recently sat down for an interview with the JoongAng Ilbo to discuss his thoughts on the accident and his artistic philosophy. The following is an edited excerpt:

Q. The tragedy has been very hard on students.

A. What more can I say? My friend’s husband was also on the Sewol ferry, but has not yet been rescued. It’s so sad that nothing more can be done.

May is one of the most perfect months to put on children’s plays.

About seven group performances were canceled after the sinking of the Sewol ferry. Because it was a national disaster, it was canceled out of respect and condolence for the victims and their families.

You have performed children’s plays for more than 20 years. Perhaps the students’ deaths meant something more to you.

I sometimes write a few words in a newsletter published among theater groups. This month, I wrote “It’s my fault, all my fault.”

The tragedy was not only the responsibility of the captain but all of Korean society. We must abandon this old state of things. Individuals who consider only themselves are not a part of the whole community.

Are you Catholic? What is your Christian name?

Peter. I go to Catholic Mass only a few times a year. But the priest who officiated at my wedding influenced me a lot creatively.

Father Jo Gwang-ho - he is also famous as an artist. As a deacon, he studied literature under Gu Sang, the poet. But after he studied abroad in Germany, he changed his major to art. When I laughed at him for his poor draughtsmanship, he said, “Korean art is not progressing because it all starts with drawing. Art starts from inside, not out.”

What does that mean?

It means we must find our own creativity. Whether the result of our work is good or bad, it doesn’t matter - but whether it is mine or not does [matter]. It was a huge shock to me back then. I was quite a good-selling actor when I was enlightened. His story doesn’t apply only to art, but also to children. It doesn’t matter if they are behaved or not.

Being on stage won’t actually make you wealthy.

Before entering college, my father called me. He said being an actor wasn’t a decent job. I told him that being an actor was serving as a messenger between the gods and humans, that it means more than what he thinks it does. He stormed out the room saying, “Do whatever you want.”

You were passionate then.

I haven’t changed. I call myself a shaman rather than an actor. I believe that planning a play is a revelation and praying is the way to receive that revelation.

Children’s plays are an unexplored form in the Korean art world. What led you toward such an uncharted field?

I participated in a summer festival in Umbria, Italy, in 1995. I worked with foreign actors, teaching Korean traditional mask dances. But the director and I had a few conflicts. He asked me to express “the god of sky and earth,” so I used traditional Korean motions. He kept saying it was not what he wanted. My cultural perspective was different than his.

What do you mean by “Korean”?

I am not talking about Korean history or food. Eating kimchi doesn’t make someone Korean. The identity of a person is determined by cultural DNA. I found that from old fairy tales. To raise our children as real Koreans, I thought children’s plays based on the folktales were needed.

Words are always easy. Wasn’t it difficult to work on plays based on folktales?

In 1996, almost 1,000 children came to see “Cinderella,” but only 300 came for “Kongji and Patji,” a well-known Korean folktale. Korean tradition was beyond the interest of Western culture. I directed a few original plays for three years, but in return I have 100 million won ($97,800) worth of debt.

How could you survive after that?

I was lonely after that and felt as if I had no real companion to share my passion with. I still tear up when I think back on that time. But soon after, I met a children’s reading organization, a book club that studies children’s literature. I once organized a lecture and we ended up sharing our thoughts. The members of the club … supported my dream and encourage me to continue my work. A lot of people asked for performances. This became my basic foothold to show two or three new pieces of work each year.

How often do you perform in a year?

Planning a play, practicing it and displaying it keeps me very busy. I spend about 150 days on stage annually. Thanks to dancing a lot, I can still do a handspring, which is hard for any ordinary 55-year-old man. I perform a mask dance every morning for an hour in front of my granddaughter. I also ride my bike from Mokdong to Mapo Art Center, where my theater group is located.

Why do you emphasize school performance?

We visit elementary schools about 30 to 50 times annually, like Namsadangpae, traveling entertainers who visited villages in the old days. Enjoying a play is to share that feeling and spirit together. It is a small part of the community experience.

Moreover, every child reacts differently after seeing the same performance. They learn that diversity and variety naturally. Knowing the symbiosis and the difference, it is one of the most important things for children to learn at their age.

Why do you focus on children so much?

Everything we provide to children should be decent. We should provide them something good to eat, something good to wear. If adults start living their lives thinking about children all the time, they will change. Maybe Bang Jung-hwan, who established Children’s Day in Korea, had the same purpose. I want to show the real value [of this idea] to this world. [People nowadays focus] so much on money and studying. It’s like laying a cornerstone for a healthy society.

Our society would change [for the better] if we shared good things with children. A society that values the economy as its first priority is a tough one to live in. The tragedy of the Sewol ferry has the same root. For instance, what I like from “Heungbu and Nolbu,” the Korean folktale, is that Heungbu becomes rich for his virtuous actions. He wasn’t nice or kind toward others in order to become rich.

Children’s plays teach us to strive to understand others and embrace them for who they are.