Reporting trip that dripped with grief and guilt

Reporting trip that dripped with grief and guilt 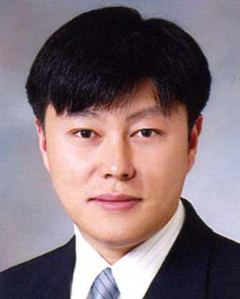 I have never felt guiltier in my 12-year career as a reporter.

On the day of the Sewol ferry accident, April 16, I traveled to the gymnasium in Jindo, South Jeolla, that would become the temporary home of friends and family awaiting news of the fate of the ferry’s passengers. Students in blankets were frustrated, asking each other whether they had seen various friends.

But at that moment, they were hopeful.

The next day, the atmosphere was totally different. The relatives of missing passengers who rushed to the scene looked very anxious.

I suddenly realized I recognized a woman in the crowd. She was the mother of one of my classmates from the sixth grade. At one time, she was like a second mother to me.

I was about to say hello, but decided to do some checking first. I called my friend from grade school. He told me that his younger brother is Lee Hae-bong, a teacher at Danwon High School in Ansan, Gyeonggi, which sent its 11th grade onto the Sewol for a trip to Jeju.

I remembered the brother. He was a nice boy who used to help his carpenter father in his workshop.

I approached the mother and expressed my concern.

“Please get Hae-bong out of that ship,” she said. “You’re a journalist. You can do something, right?”

I answered yes in an unconvincing tone.

Every time we met, she kept asking me the same question. “There’s something you can do, right? You’re a journalist.” 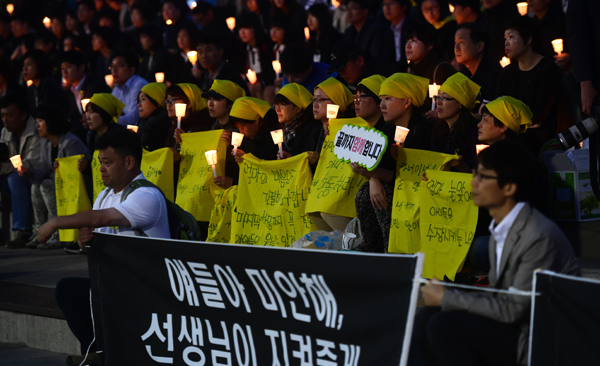 Teachers and residents in Ansan, Gyeonggi, stage a candlelit vigil Thursday night to mark a month after the Sewol ferry capsized. [NEWSIS]

I felt more and more uneasy because I knew nothing about corruption or collusion in the shipping industry. I blamed myself for not caring about it as a reporter in the past.

And I knew there was nothing I could do about it now.

Lee’s corpse was found on May 5, 19 days after the accident. His family could finally leave the gymnasium and Paengmok Harbor, where the remains of the casualties of the Sewol disaster were brought in from the sea, to take their son home.

Two weeks before, I watched a corpse hauled into one of the tents set up for identification of remains at the harbor. A gust of wind lifted the tent’s flap and I got a brief glimpse inside. A father was burying his face in front of his daughter’s corpse. The mother had collapsed but was still holding her daughter’s hand. I have witnessed many accidents, but for the first time, I felt paralyzed.

After a while, a sense of guilt surged up in me and I couldn’t help but think of my own family and how much I missed them.

I have felt an undercurrent of guilt ever since. At midnight last Tuesday, the families still stuck in Jindo walked to the sea at Paengmok Harbor and cried out the names of the 29 still-missing passengers one by one. They asked them to come back, to return to them.

Many of those names were familiar to me following my month in Jindo. I had heard them in prayers by the relatives, in remembrances and in wails of grief and despair.

Early morning Thursday, I left Paengmok Harbor after 29 days. I wrote, “I wish you are born into a better world” on a yellow ribbon and tied it to one of the tents. Turning back from the harbor I said to myself, “I will do my best to make it a better world for you to come back to. I’m sorry. I am really sorry.”