Red Devils ready to hit the road to Brazil

Red Devils ready to hit the road to Brazil 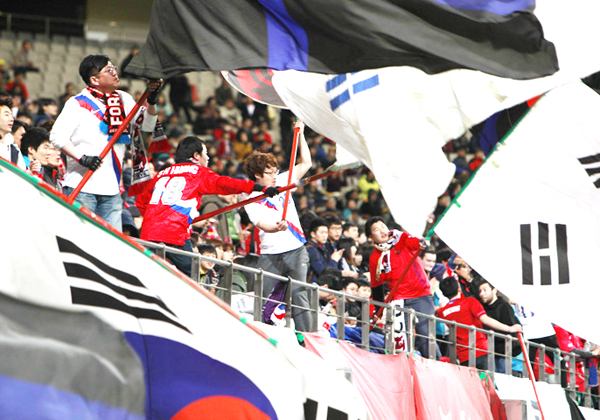 In the 2002 Korea-Japan World Cup, the world wasn’t only surprised that the Taegeuk Warriors finished in fourth place, but also by the country’s football supporters, “Red Devils” who came out all over the country including on streets close to Seoul City Hall in Jung District, central Seoul, and at COEX in Samseong-dong, southern Seoul.

More than 10,000 people wearing a red shirt that said “Be the Reds!” gathered at those places for each Korea match and their organized and enthusiastic cheering grabbed the world’s attention.

Whenever a World Cup is held, Koreans consider themselves to be Red Devils, but it means even more for Ban Woo-yong, head of the supporters.

“The Red Devils started with only dozens of people in the 1998 France World Cup,” Ban told the JoongAng Ilbo at the Korea Football Association in Gwanghwamun, central Seoul, last week. “It has been 16 years and the Brazil World Cup will be our fifth event. We are preparing to give our best support in Brazil.”

Ban said that most of the group’s work will be carried out in Brazil. Members of the Red Devils would normally lead cheers on the streets and at famous sites such as the City Hall even if the match was being played abroad but plans for domestic cheering have been canceled due to the April 16 Sewol ferry disaster. 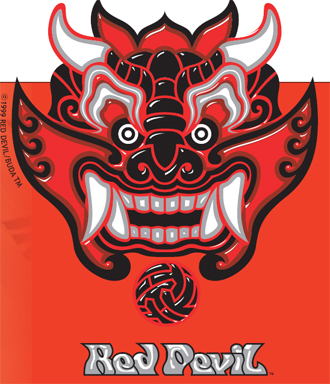 “We are trying to find the best way to console the nation after it has been in deep sorrow for more than a month,” Ban said.

About 120 members of the Red Devils are going to Brazil and many of them have cheered abroad at previous World Cups. They will support the Taegeuk Warriors in their three Group H matches against Russia, Algeria and Belgium. Ban said he expects that the number of supporters in attendance would be between 2,000 and 4,000 including Koreans living in Brazil and tourists who will join them.

He said the Red Devils would be cheering loudest at Korea’s match against Belgium that will be held in Sao Paulo, which has about 50,000 Korean residents. 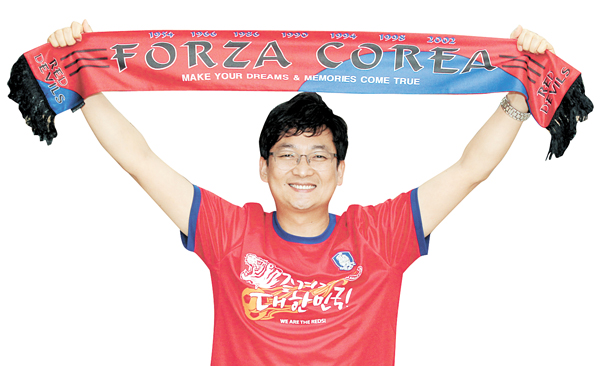 “We expect to see more than 10,000 supporters there,” Ban said. “I think we will give our best support ever because Belgium’s nickname is also the Red Devils. We will show who the true Red Devils are.”

But it won’t be just fun and games for the Red Devils. The group has to travel about 3,000 kilometers by bus to the three matches. The distance between Cuiaba, where Korea will play Russia and Porto Alegre for the match against Algeria, is 2,000 kilometers.

“Fortunately, Hyundai Motor provided a bus,” Ban said. “That saved us about 3 million won each. We are not just going there to enjoy watching the Taegeuk Warriors play. It will be a tough trip for us as well, but we consider this a chance to meet other supporters around the world.”

The Red Devils will wear red shirts as they have in previous World Cups, but the phrase “Be the Reds!” will be changed to “Enjoy it, Reds!”

“Korea has been focusing on the results of most international events,” Ban said. “We really want our players and supporters to see and enjoy football itself, which we think is the true meaning of a World Cup.

“We might have fewer supporters than other nations because Brazil is so far away, but I’m sure that the Red Devils are the most enthusiastic supporters in the World,” he added.